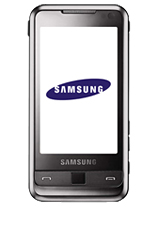 The latest White edition of the Samsung Omnia mobile phone has today been released as a SIM Free handset, the Samsung Omnia in White was first launched in its 8GB variant just a few days ago on Vodafone in the UK but now a new 16GB edition has now been added to Samsung’s portfolio.

The Samsung i900 Omnia White 16GB SIM free is great for those that do not want the hassle of a contract deal, consumers can just buy the white Omnia outright and insert their existing SIM card to retain their mobile number and contacts list. (Bearing in mind that the contacts have been saved to SIM)

The only difference between the new 16GB White edition and the original 16GB Samsung Omnia is the substitution of the colour of the back panel which is obviously now finished in white, the front of the Samsung Omnia stays the same.

Based on Windows Mobile 6.1 Pro, the Samsung Omnia offers a 3.2-inch WideQVGA display (240 x 400 pixels) and an optical mouse much like the one found in the Samsung i780.

Camera-wise the Samsung Omnia White 16GB is one hell of a amibitious handset – offering a 5 megapixel auto focus snapper with face and smile detection plus auto-panorama shot. Geotagging is also among the camera features since the i900 also packs a built-in GPS receiver.

Multimedia
Expandable microSD memory and MP3 music player lets the 16GB Samsung Omnia White keep you entertained whilst on the move. FM stereo radio lets you choose your favorite talk and music stations to listen to whilst out.

Connectivity
High speed 3G connectivity and built in web browser lets you stay in touch with news, sport and current events instantly at a touch.

Tech212 years ago
You Are Here