Samsung just unveiled its 2010 lineup of Blu-ray players, reaching new frontiers in delivering quality HD home entertainment. . Standing out among the four-player lineup is the winner of the 2010 CES Best of Innovations Award, the BD-C6900, featuring built-in 3D playback and supporting the new 3D Blu-ray standard. For those looking for the best in design and performance, the BD-C7500 offers the slimmest Blu-ray player to date, with a nature-inspired, contemporary form factor. The BD-C6500 combines performance and speed, and the entry-level BD-C5500 delivers an eco design. All players in the 2010 lineup support Internet@TV for the first time, providing access to a wide range of online content. 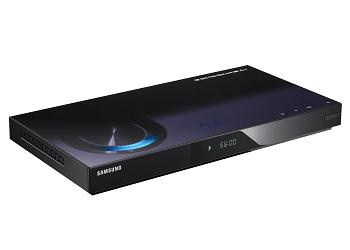 The Samsung BD-C7500 is a beautiful, nature-inspired player, offering a multimedia experience that goes well beyond traditional Blu-ray players. A CES 2010 Innovations Honoree in the Video Components product category, the BD-C7500 is the world’s slimmest Blu-ray player at 1.1 inches. The ultra-slim device features an elegant nature-inspired wood design coated with jewel-like gloss. Designed to be wall-mounted, placed on a 25-degree angle stand or placed flat, it can be configured to match almost any home entertainment set-up.

The BD-C7500 features improved disc load and boot up times, while the 1080p playback reproduces movie images at 24 fps without need for up-conversion, resulting in a natural on-screen motion.

Getting into the Action with Immersive 3D Playback: BD-C6900

Entertainment enthusiasts can enjoy for the first time 3D content on their Blu-ray player, enhanced with multi-channel HD surround sound with the BD-C6900. As demand for 3D content increases, Samsung provides consumers with a way to immerse themselves into the entertainment experience and watch their favorite 3D titles from the comfort of their homes. The player is compatible with Samsung’s new 3D HDTVs and recently ratified 3D Blu-ray standard, for the ultimate in immersive, life-like experience.

True to its commitment to elegant design, Samsung delivers the BD-C6900 in a slim design and a transparent cover that allows the consumer to see the disk spin as it plays.

Fast Performance, Quality Entertainment: BD-C6500
With a lightning fast 15-second disc load and 15-second boot-up time, the BD-C6500 is one of the quickest Blu-ray players in the market giving consumers more time to relax and enjoy their favorite movies in high-definition. Another CES 2010 Innovations Honoree, the player features enhanced Blu-ray disc playback using Samsung’s Adaptive Servo Technology (AST). All of this is packaged in a slim and sleek design.

Eco-Friendly Home Theater Experience: BD-C5500
Consistent across all of the 2010 Blu-ray player models is a commitment to green attributes, starting with the BD-C5500 Blu-ray player. Each player has improved energy efficiency by using new technologies such as loader duty control, low voltage spindle motor, and analog video detect, which contribute to a reduced power consumption of 13W during disc playback, and just 0.1W in stand-by mode. The players are all compliant to the more stringent EnergyStar 4.0 guidelines.

The BD-C5500 is designed for the consumer who wants a high-performing Blu-ray player with advanced multimedia features at an affordable value. The player is Wi-Fi ready (separate purchase of Wi-Fi USB dongle required) allowing consumers to surf the content of their DLNA devices or the diverse entertainment options via Internet@TV.

With a focus on connected entertainment, all models from the step-up BD-C6500 and above include built-in Wi-Fi support, and for the first time ever, consumers will be able to access Samsung’s upgraded Internet@TV feature through their Samsung Blu-ray players via their wireless/broadband connection, even if they do not have a Samsung HDTV. New for Internet@TV this year is Samsung Apps, providing consumers with an expanded, easy to navigate selection of content and applications from leading services Accedo Broadband, AccuWeather.com, The Associated Press, Blockbuster, Fashion TV, Netflix, Picasa, Pandora, Rovi, Travel Channel, Twitter, USA TODAY, and Vudu.