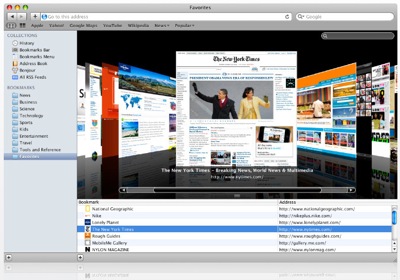 Starting with the development of the open source WebKit browser engine, Apple has been leading the industry in defining and implementing innovative web standards. Safari 4 includes HTML 5 support for offline technologies and support for advanced CSS Effects, enabling an entirely new class of web applications that feature rich media, graphics and fonts. Safari 4 is the first browser to pass the Web Standards Project’s Acid3 test, which examines how well a browser adheres to CSS, JavaScript, XML and SVG standards that are specifically designed for dynamic web applications.

Safari 4 includes Top Sites, for an incredible visual preview of frequently visited and favorite pages; Full History Search, to search through titles, web addresses and the complete text of recently viewed pages; and Cover Flow, to easily flip through web history or bookmarks. Other innovative features include Smart Address Fields for automatically completing web addresses from an easy to read list of suggestions; Search Fields, to fine tune searches with recommendations from Google Suggest or a list of recent searches; and Full Page Zoom, for a closer look at any website without degrading the quality of the site’s layout and text.

In Mac OS X Snow Leopard™, available later this year, Safari runs as a 64-bit application, boosting the performance of the Nitro JavaScript engine by up to 50 percent.** Snow Leopard makes Safari more resistant to crashes by running plug-ins in a separate process, so even if a plug-in crashes, Safari continues to run and the user simply has to reload the affected page. Safari running on Snow Leopard also delivers HTTP streaming, making it easy to deliver high-quality audio and video in industry standard formats from any web server without the need for browser plug-ins.

Pricing & Availability
Safari 4 is available for both Mac OS X and Windows as a free download at www.apple.com/safari. Safari 4 for Mac OS X requires Mac OS X Leopard v10.5.7 or Mac OS X Tiger v10.4.11 and Security Update 2009-002, a minimum 256MB of memory and is designed to run on any Intel-based Mac or a Mac with a PowerPC G5, G4 or G3 processor and built-in FireWire. Safari 4 for Windows requires Windows XP SP2 or Windows Vista, a minimum 256MB of memory and a system with at least a 500 MHz Intel Pentium processor.

**Performance will vary based on system configuration, network connection and other factors. Testing conducted by Apple in May 2009 comparing prerelease Mac OS X Snow Leopard v10.6 with shipping Mac OS X Leopard v10.5.7. Testing was conducted on a shipping MacBook 2.0 GHz system and a shipping iMac 2.66 GHz system, both configured with 2GB of RAM. JavaScript benchmarks based on the SunSpider Performance test comparing Safari running in both 32-bit and 64-bit modes.