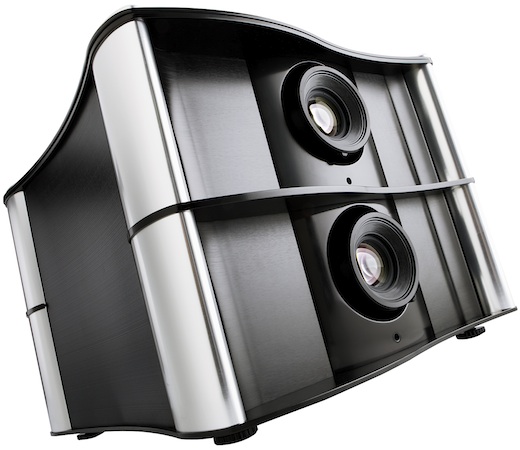 Runco announced the 3Dimension Series D-73d DLP projector based on an evolution of Runco's lampless LED technology. Runco's InfiniLight boasts a significant reduction in power consumption, a mercury-free illumination system, and InstantOn, which instantly produces an image and eliminates the need to put the projector in standby mode. These breakthroughs combine to create an energy-efficient solution with high reliability.

Beyond light-source innovation, Runco's LED-based projectors produce the largest color gamut ever available in front projection; achieving and exceeding the Society of Motion Picture and Television Engineers (SMPTE) and Digital Cinema Initiative (DCI) standards. The D-73d offers Runco's Personal Color Equalizer (PCE), which enables owners to create color settings from the largest pallet ever available and project images exactly to their preferences. Further, the D-73d outputs more perceived brightness than other 3D solutions because of Runco's proprietary LED technology and its ability to create exceptional chromaticity. Perceived brightness is a function of not only luminance, but also chromaticity and more saturated colors are perceived as brighter than pastel versions at the same measured brightness levels. In other words, the D-73d is 60 percent brighter than the specifications would indicate and can be used in similar environments and in similar screen dimensions as other projectors that specify significantly higher brightness. The combination of colors, perceived brightness and performance enable the Runco D-73d to set a previously unseen standard on the 3D and 2D viewing experience to deliver flawless video at home.

Runco's revolutionary 3D solution is based on Runco's proprietary CSV (Constant Stereoscopic Video) architecture. Runco CSV is a vastly-superior approach to 3D visualization that enables seamless decoding, syncing and merging of stereo images and delivers a constant HD image to each eye without the flicker, distortion, or discomfort inherent in other approaches. Runco CSV utilizes unique passive-glasses technology, which is proven to be superior for the viewer and is usually only available in the finest public theaters. Further, Runco is the first home theater brand to license RealD's Processing Package, which is used in Runco's 3Dimension Processor that is paired with the company's D-73 projector. The RealD Processing Package includes multiple proprietary technologies for the delivery and display of high-definition 3D content, for a high-quality 3D display experience in the home. Also incredibly important when choosing a 3D display, the Runco 3Dimension Series will deliver both a spectacular 2D and 3D viewing experience with zero compromise.

The Runco Dimension Series is wrapped in a gorgeous, new benchmark industrial design named Runco Copenhagen. Runco's Copenhagen design is inspired by both classic and modern Danish architecture and design, including the influential works of Arne Jacobsen, whose famous Swan Chair set the standard in the late 1950s, and the playful shapes of trend-setting furniture designer Verner Panton. Utilizing a design aesthetic that has been integrated by avant garde furniture designers and luxury furniture retailers, the smooth curves and elegant finishes of Runco's new design fit with a variety of room designs and decor styles: from modern to traditional, from transitional to eclectic. Elegant and unexpected materials, such as glass and vented metal, combine to make a personal statement that's innovative and unique well beyond traditional electronics.

The D-73d ships with the new Runco 3Dimension processing system, which includes Runco's upgraded, award-winning Digital High-Definition (DHD) external video processor. The new Runco DHD4 offers the most advanced alignment in Runco history, allowing for ultra-precise installation geometries, more extreme installation scenarios, and the removal of any pin-cushion effect that can be caused by 2.35:1 scaling, improving the CineWide technology. The DHD4 now also supports control over HDMI CEC in addition to the traditional IR and the expanded RS-232 connections. And for added dealer convenience, the new web interface allows for calibration from a laptop, smart phone, Apple iPhone, or iPad, which makes installation and set-up even easier for the installer. In addition, the Runco DHD4 offers more connectivity than its predecessor, offering four HDMI inputs and three composite video connections. An additional HDMI output was added for audio and monitoring purposes. The D-73d 3Dimension Processing system not only provides exceptional scaling and processing with the DHD4, but also decoding and playback of 3D content in compliance with the HDMI 1.4 standards. Just like the human brain makes sense of three-dimensional content, the 3Dimension processor ensures that the whole solution works as an integrated system.

Price and Availability
The Runco D-73d projector is coupled with industry-leading RuncoCare service program with additional warranty support available. Runco's D-73d will be available Q4 2010 with an MSRP of $49,995. Optional lenses, CineWide, CineWide with AutoScope, and additional 3D accessories, such as replacement glasses or premium or prescription glasses, are additional costs.

Constant Stereoscopic Video reduces eye fatigue
Runco's new CSV technology is a premium 3D visualization architecture. Current 3D technology relies on the viewer wearing a set of glasses designed to filter a separate image to each eye. The illusion of depth is created by sending a slightly different image to each eye. The left and right eyes are spaced so that everything seen is at an angle. The human brain processes and combines these two images into one complete picture with the perception of depth. Runco CSV is based on the human brain and eye physiology (called stereopsis) and mirrors it precisely to create perceived depth with a constant HD image to each eye. In contrast, time-sequential based 3D display systems, like those found on 3D televisions, flicker the image on and off at the eye, which can degrade the 3D effect and often results in eye fatigue and discomfort.

Passive glasses improve the 3D at home experience
Runco's 3Dimension Series pair passive glasses with a design unique to Runco formulated for precise stereo separation, called PreciseLight. Runco's passive glasses are not like current 3D TV glasses, which are based on “active” LCD shutter-glass technology and have inherent design challenges. Active glasses are bulky and expensive because they include electronics. And, because active glasses have LCDs in each lens, and turn black every other frame (or more frequently), active glasses need a transmitter that is synced to the frame rate. If you are out of range of the transmitter, low on batteries, have multiple TVs in a single room, or have any obstructions, the image may stutter or simply not work.

The concept for passive glasses paired with Runco CSV is very simple; project constant images to both the left eye and the right eye simultaneously into the same space, and then use Runco's proprietary passive glasses to show the dedicated image to its intended eye without sacrificing refresh rate or introducing flicker. Runco's passive glasses offer the audience an exceptional experience that minimizes eye fatigue and the discomfort often associated with active glasses. Runco's 3Dimension Series projectors come with six pairs of glasses that work exclusively with your Runco display for the best stereo separation and linear polarization for 3D viewing. Additional glasses are available for purchase. Runco is also offering an optional upgrade of its passive glasses, which is both stylish and optimized to provide curvature without distortion, as well as prescription options, which will be available soon for a truly custom experience for clients who already wear prescription glasses.

3D with no-compromise to 2D
Runco 3Dimension Series projectors produce exceptional 3D and 2D content. Because it is estimated that 2D content still comprises more than 90 percent of the material viewed in home theaters and private cinemas, the projection screen is a significant factor and must accommodate both 2D and 3D viewing. Runco has rated home theater screens on their ability to produce 2D and 3D content on a scale it calls PISCES: Polarized Image Sequence Conservation and Enhancement Standard. Specifications and testing criteria include: image quality, polarization preservation (extinction ratio), viewing angle, and brightness for home theater for both 2D and 3D content on the same screen. Runco makes its PISCES rated screen list available to authorized Runco dealers so they can support specifying the best screen for every home theater application.