ReQuest adds Pandora to its growing list of streaming entertainment sources and expands two-way control to Crestron, AMX, RTI and Universal Remote Control touch screens. The Serious Play web server will be optimized for use with the iPad and overall system speed will be increased.

Pandora® streaming music service is now available on all F.Series and iQ systems. Pandora brings hundreds of user-customized stations to your home audio system. Owners can skip songs they dislike, mark songs they like as favorites, and Pandora delivers music tailored to their tastes. With a Pandora-One account and a ReQuest system, users will enjoy full cover art, metadata, unlimited skipping and a high quality audio stream. Listeners in different zones can even play different Pandora stations simultaneously. 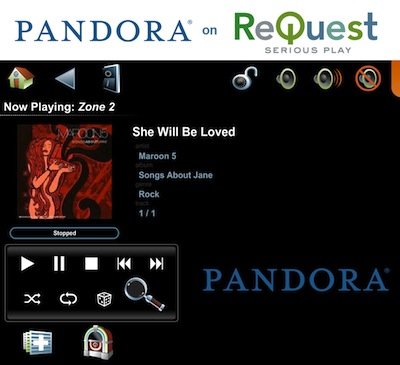 Pandora on an F.Series is controllable via any web browser, iPhone, iPod Touch, iPad, or touch screen. Streaming Radio must be enabled on the system to use Pandora. This update will be available for all F and iQ systems shipping by the end of July when ReQuest launches their Serious Play 6.3 firmware update.

Also on the very near horizon is a wide range of new control modules for the F.Series. Crestron and AMX controls will display a brand new interface designed to emulate the look and feel of ReQuest's own touch screen GUI with all the same colorful icons and two-way feedback. For systems with Classical Music Mode, information on the orchestra, composer, conductor, and performance will also be available right on the interface.

Later this summer, updated two-way feedback modules for RTI and Universal Remote Control systems will also be available. Beta users have already praised the “remarkably quick” controls. All updated integration modules will be freely available on the ReQuest website by the end of July.

Finally, ReQuest is optimizing their Serious Play web server for use with the iPad® browser. All the same rich information and real-time feedback ReQuest owners are used to in a computer browser will be right there in the palm of their hands. They can add music to the queue with the same “click anywhere” interface, edit metadata for one track or an entire album, or take control of any and every zone in the house all from the powerful multi-touch tablet. 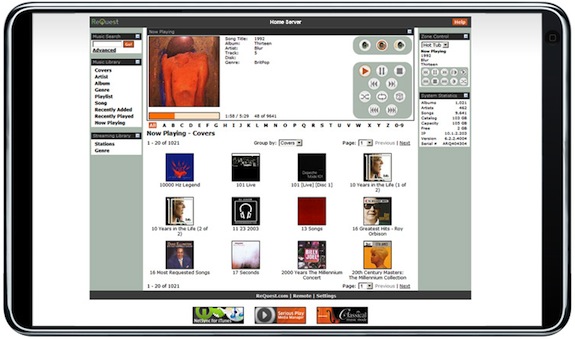 The iPad-optimized web server will be available for all ReQuest systems with the Serious Play 6.3 update scheduled for the end of July.

As a final bonus to ReQuest owners and dealers, Serious Play 6.3 brings an overall boost in system speed across the board. Media browsing in an updated system is 34% faster, boot time is 28% quicker, and metadata tag writing is faster than ever.

About ReQuest
ReQuest, Inc.'s home-entertainment systems have set the standard for high-end digital media storage, management, playback, and system integration since 1998. The Company's award-winning media servers are the accepted leaders in cutting-edge technology. ReQuest has received numerous accolades for having the best service in the consumer electronics industry, with an installed base of more than 40,000 units.