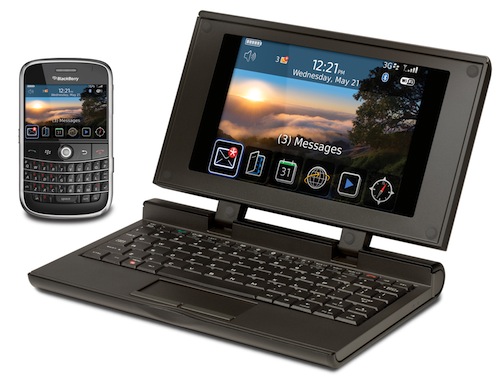 Connects BlackBerry Smartphones to a Larger Screen and Keyboard

The REDFLY Mobile Companion is not a computer; it’s simply a large screen and full keyboard for a smartphone. With the REDFLY, BlackBerry smartphone customers now have the ability to increase their productivity typing long emails, editing documents, browsing web content and more using their existing smartphone applications and data plan.

Productivity is top of mind these days for mobile professionals, and according to the latest research by the technology economists at OMNI Consulting Group, this poses a key inflection point in the evolution of smartphone technology.

“Across the host of economic factors that matter most in selecting a technology such as REDFLY, the net improvement of productivity remains decisive in choosing a platform that enhances the ability to accomplish more work output with existing smartphone investments.” said Frank J. Bernhard, managing principal of the supply chain and telecommunications practice at OMNI Consulting Group. “Case data shows this trend to be positive in how users can actualize their fullest potential of the BlackBerry smartphone itself.”

“BlackBerry is a leader in the smartphone market and has an overwhelming acceptance among business users,” said Kirt Bailey, president and CEO of Celio Corp. “We’re confident that BlackBerry smartphone customers will enjoy the convenience of using REDFLY’s larger screen and keyboard to type emails, browse the Internet, and edit documents.”

The REDFLY Mobile Companion comes in two models – the C8N and C7 – and has a large screen, full QWERTY keyboard, touchpad, up to an 8-hour battery, and USB, VGA and media ports. The REDFLY has no OS, storage or processor, but uses the BlackBerry smartphone’s computing power to give users the ability to interact with the smartphone’s familiar user interface on an 800×480 resolution display. The REDFLY is currently also compatible with more than 60 Windows Mobile devices.

At launch, the REDFLY is supporting the BlackBerry Bold 9000, BlackBerry Curve 8900 and BlackBerry Tour 9630 smartphones. The driver for BlackBerry smartphones is offered free-of-charge for existing and new REDFLY Mobile Companion C8N and C7 owners and can be downloaded at http://m.celiocorp.com/install.