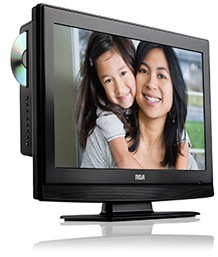 TTE Corporation, the manufacturer and marketer of RCA-brand televisions, is responding to consumer demand for affordable high-definition screens appropriate for any room in the house with a 2010 lineup on display at next week’s annual Consumer Electronics Show that includes seventeen different high-definition TV models (see photos below).

“LCD flat-screen technology continues to be the most popular way for consumers to upgrade their viewing experience, and we’ve developed new products that respond to consumer demand for affordable second and third-room screens. Some are perfectly sized for movies — and kids — with built-in DVD players, and others have the ‘bells and whistles’ needed to deliver a Full HD experience when connected to a Blu-ray player or gaming console that can output 1080p signals,” said Richard Dinsmore, Vice President of TTE’s North American Business Center.

High Standards of Energy Efficiency
TTE is also readying RCA Televisions that qualify for the latest federal ENERGY STAR efficiency label, including two entire series of products that are fully qualified with tighter efficiency regulations that take effect this spring. The U.S. Environmental Protection Agency has finalized ENERGY STAR 4.0 specifications that establish new standard for “on mode” power consumption. Those tighter regulations take effect on May 1, and all of the new RCA HDTV sets will qualify for the ENERGY STAR mark. 26-inch and larger models in the new F11 series utilize the RCA Intuilight™ Light Sensor that detects ambient room light to automatically adjust contrast on the screen. The result is better energy efficiency that is perfectly balanced for your room’s environment — night or day.

F10 Series: Value for Every Room
High-definition screens in the RCA F10 series are available in 19-inch, 26-inch, 32-inch, and 40- inch LCD screen sizes. The smaller screens in the series (L19HDF10, L26HDF10, and L32HDF10) all feature 1366×768 high-definition resolution, HDMI (High-Definition Multimedia Interface) and HD component video connections, and a USB 2.0 interface for display of .JPG images and playback of mp3 audio files.

The largest F10 model, the 40-inch L40FHDF10, is equipped to display Full HD 1080p signals at 1920×1080 resolution through one of three HDMI inputs. This model also includes eight watts of audio per channel.

F11 Series: “Invisible” Speakers Highlight Slim Design
With a remarkably slim profile and stunning front panel design, on-board speakers in the RCA F11 series are designed to hide underneath the front edge of the panel bezel. This design cue makes the speaker grille invisible when viewing the set from the front, and insures that the beautiful product will easily slip into custom cabinetry.

The most advanced screens in the F11 Series are 1080p-capable models that feature 120Hz scanning for enhanced resolution. The 40″ L40FHD2XF11 and the 46″ L46FHD2XF11 also come equipped with four HDMI and one HD Component connections, USB media playback, eight watts per channel of audio power through “invisible” speakers, and swivel stands.

Also in the 2010 line is the stunning and full-featured 46-inch L46FHDE9A, a 1080p-capable model with 1920×1080 resolution, 4,000:1 contrast ratio, eight watts per channel audio power, three HDMI and one HD component video connections, and a digital audio output for surround sound systems.

Three combo products in 2010 bring together the convenience of merging a standard DVD player with a high-definition LCD screen. Featuring 1366×768 LCD resolution, the new RCA models are available in 22-inch, 26-inch, and 32-inch sizes. Each combo model has a slot-loading DVD player with “disc eject” function on the handheld remote control and each also qualifies for ENERGY STAR recognition:

About TTE Corporation: A wholly-owned subsidiary of TCL Multimedia Technology Holdings Limited (“TCL Multimedia” or “the Group”, stock code: 1070.HK), TTE Corporation is committed to the development, manufacturing, sales and marketing of world class digital television products, and employs a highly-skilled workforce in regionalized business and R&D centers, with manufacturing plants throughout the world. Marketed in North America, Asia, and Europe under the “RCA and RCA Scenium”, “TCL”, and “Thomson” brands respectively, TTE provides consumers with a wide range of television options — from budget to premium, from basic features to high-end innovation.