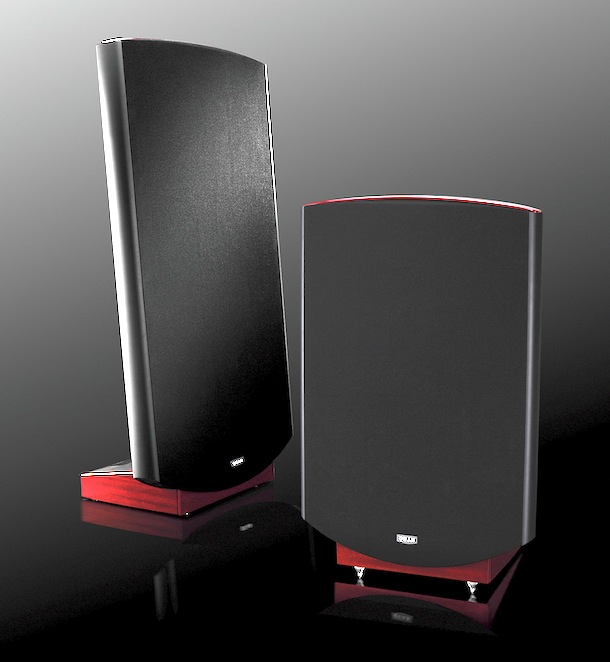 Quad introduced the ESL-2812 and the taller ESL-2912 electrostatic loudspeakers that can play louder and handle more power than their predecessors, are more pleasing to the eye, and deliver even greater sonic clarity. Quad proclaims they are the best speakers they’ve ever made.

Quad does not update its ESL speakers very often. The last change came in 2005, with the ESL-2805 and ESL-2905 (the last two digits in the name indicate the year of launch). These speakers represented the most significant evolution for years, sporting a number of technological improvements that brought universal critical acclaim. Their greatest sonic asset remained their extraordinary midrange – the most critical part of the frequency spectrum for music reproduction – demonstrating the effortless clarity, dexterity and openness that many critics believe is still unmatched.

Quad ESL – the original electrostatic speaker
The difference between an electrostatic ʻpanelʼ speaker and the more common dynamic driver type is the use of an ultra-thin, electrically charged diaphragm, suspended in an electrostatic field to generate movement and thus sound waves (as opposed to woofer cones and tweeter domes, moved back and forth by a coil in a magnetic field). The diaphragm in Quadʼs ESL speakers is made from a layer of stretched Mylar, ten times thinner than a human hair and so light that it approaches the mass of air to which it is coupled. As a result, there is no inertia inherent in the speakerʼs moving parts and the diaphragm is able to respond to musical detail and transients with extreme precision.

Quad ESL speakers are among the very few that can reproduce a 1kHz squarewave precisely and cleanly. To achieve this, they use a system of highly charged ʻstatorʼ elements either side of the diaphragm, coupled to a power supply that produces the necessary 5kV of EHT (Extra High Tension) charge that controls the diaphragm. How this extremely high voltage charge is produced and consistently maintained at the diaphragm to stator interface is the key to the ultra-low distortion of the Quad ESLʼs sound.

Like the outgoing ESL-2805 and ESL-2905, the latest ESLs incorporate multiple electrostatic panels – four in the ESL-2812 and six in the larger ESL-2912. The two inner panels utilise concentric rings of electrodes to deliver pinpoint imaging from an ideal point source – a unique Quad innovation that ensures all listeners perceive accurate stereo imagery. All the panels are held within a high-mass structure of tensioned aluminium extrusions coupled to stainless steel supports, ensuring optimal transmission of sound energy and a supremely accurate transient performance.

Improving an all-time classic
The ESL-2805 and ESL-2905 were already great speakers, yet the challenge presented to Quadʼs engineers was to make them better still, enhancing both performance and aesthetics whilst remaining true to Quadʼs ESL legacy. They began by improving the power supply for EHT voltage, eliminating ʻcreepageʼ (the possibility of charge flowing between components on the circuit board) by developing a new two-layer PCB with 2oz copper, which ensures optimum insulation and distance between contacts and a symmetrical layout for the components. This new layout also facilitates an improvement in cable dressing, again reducing the effects of creepage, particularly in high-humidity environments. 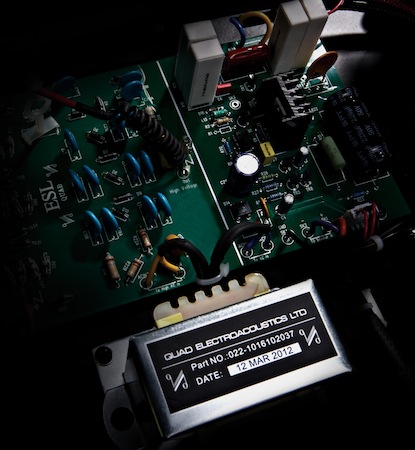 New components have been introduced to the power supply, including Vishay metal film resistors and Murata audio-grade capacitors. Although not directly affecting the signal path, these components have a significant effect on the consistency of the EHT supply and therefore signal purity when reproducing music.

Attention has also been paid to the stators themselves. Each stator consists of a layer of copper on a thin, insulating backing, which is punched with a pattern of holes to make it sonically transparent. The copper is etched to provide the conductive pattern necessary to re-create the point source attributes of the Quad ESL. After etching, the copper needs to be insulated from the diaphragm, which will lie in close proximity to it.
In the ESL-2812 and ESL-2912, the insulation material is applied in three coats using a special spraying technique, perfected to avoid degradation of the EHT charge under high dynamic conditions where the diaphragm comes into close contact with the stator. These latest versions of the Quad ESL can thus play louder and handle more power than previous models.

Even so, as with any loudspeaker, it is possible to overdrive the new Quad ESLs. In cases where ultra-high output power amplifiers are used, power protection will come into play. As soon as overdriving is detected (by a momentary collapse of the EHT level or through arc detection) the speaker is temporarily muted and the illuminated Quad logo will flash. In this way, the user is instantly alerted to the overdrive state and can reduce the volume level. 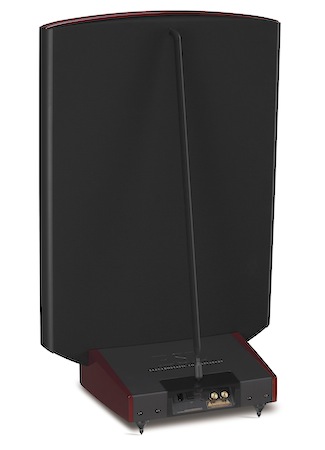 Distortion from the ESL-2812 and ESL-2912 is so low that if the power protection circuit were not present, listeners would often be unaware of the extremely high sound pressure levels that these speakers can generate. For a conventional speaker, the rapidly increasing distortion at higher power levels is an obvious indicator that the hi-fi system is playing very loudly. With the ESLs, no such distortion makes itself known, as the speakers will play cleanly up to their maximum potential. By providing visual indication of the overload condition, the user will immediately know that the system is being played beyond its dynamic capability.

A number of external improvements serve to further enhance the sonic performance and aesthetic appearance of the new ESLs, both of which are slightly taller, narrower and less deep than their predecessors. A new net cloth has been specified to cover the elements, delivering superior audio transparency in addition to a smarter, cleaner look. The underlying grille support sports newly designed strengthening ribs, reducing the possibility of resonance and ensuring the grille cloth remains under tension without overstretching. 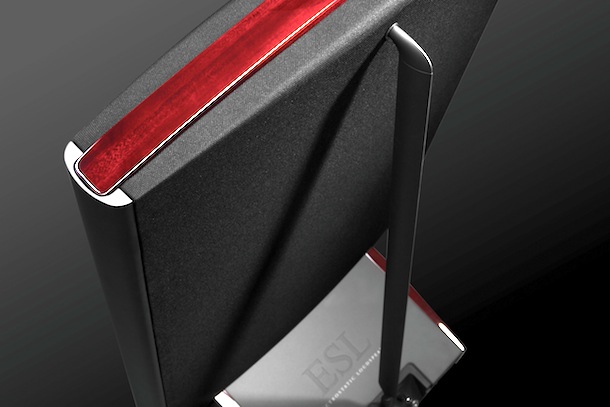 Matching wood-veneered panels now adorn the top of the speakers and the sides of their substantial bases, formed from high-density plywood to further damp frame resonances and smothered in layers of piano lacquer. The shielding cover on the base is embossed with the Quad logo and all typography is now in gold lacquer paint; the gold-plated cable terminals, corresponding PCBs and wiring have also been enhanced.