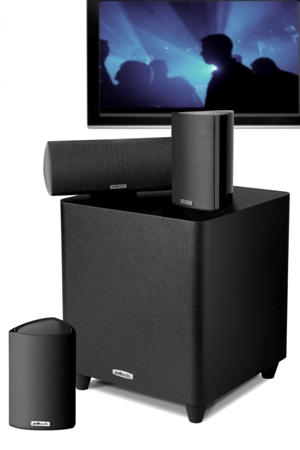 Polk Audio announced several new models in their highly successful RM Series satellite speaker systems. Polk’s RM Series of small, stylish subwoofer/satellite systems dates back to the original RM3000 introduced in 1990. Over the years the series has been a perennial best seller garnering dozens of industry awards for performance, innovation, and sales success. The new models continue the storied RM tradition and feature vastly improved styling and performance than the models they replace.

The RM705 system (MSRP $599) is a 6-piece, 5.1 channel home theater speaker system with 4 matched satellites (available separately as RM7), a center speaker (RM7C) and a powered subwoofer in one carton. The satellite enclosures of the RM705 system are low-resonance injection molded mineral-filled polypropylene and finished in beautiful high gloss black. The triangular shape of the satellites contributes to the superior imaging and midrange performance of the product while allowing the RM7s to swivel up to 180 degrees in the horizontal plane when used with the supplied wall-mount bracket. The center channel speaker comes with a shelf cradle and a wall mount bracket–both of which permit up-down aiming.

The satellites and center channel components of the RM705 system are available separately for the convenience of owners who wish to upgrade to 6.1 or 7.1-channel systems. The L&R satellites (called RM7 when packaged alone) are available in gloss White as well as gloss Black while the RM7C center is available only in gloss Black.

The step-up system is the RM85 (MSRP $599), a 5 pack of two RM8 front satellites for the front channels, two RM7 satellites for the surrounds and a matching RM8C center channel speaker. Five-pack packaging allows consumers to choose the subwoofer that best meets their needs and room size. The RM8 front channels satellites feature two of the same 2.5-inch midrange drivers used in the RM7, with one midrange driver and a 3/4-inch dome tweeter on one baffle and a single midrange on the adjacent baffle. This bi-directional Wide Angle Array generates a huge, spacious soundfield for listeners throughout the room. Even off axis listeners hear perfectly balanced and articulate sound. Supplied aim-able wall mount brackets and shelf stands make the RM8 series sats and center easy to place and use.

An alternative 5-pack system is the RM95 that offers RM8 Wide Angle Array satellites for both front and surround channels along with the RM8C center.

An optional SA-3 floor stand is available for the RM7 and RM8 satellite speaker models. The RM705, RM85, RM95 systems and their components will be available in the USA and Canada in September 2007; see them at CEDIA Expo booth 830 in the Colorado Convention Center, September 6 – 9, 2007.

About Polk Audio
Polk Audio is an award-winning designer and manufacturer of high performance audio products and the largest audio brand of Directed Electronics, Inc. (NASDAQ, DEIX). Founded in 1972 by three Johns Hopkins University graduates, Polk Audio holds over 50 patents for advances in audio design and technology. Polk’s products include loudspeakers and electronic components for home, auto and marine applications, the first satellite radio home component tuner, the world’s first audiophile-grade active IP-addressable loudspeaker, the first THX Ultra2 Certified in-ceiling loudspeaker, and I-Sonic-the first entertainment system to include HD radio, XM Connect & Play capability and a DVD player. Polk products are available through authorized specialist consumer electronics retailers worldwide. For more information and the location of a Polk retailer or distributor in your area visit the www.polkaudio.com or call us at 1-800-377-7655 (USA and Canada). Outside of North America call +1 (410) 358-3600.