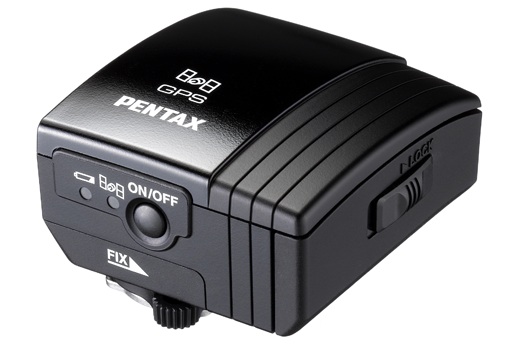 PENTAX announced the O-GPS1, a weather-resistant GPS unit that tracks both basic geographical and celestial body location data for earthbound and astrophotography purposes.

Mounted on the hot shoe of select PENTAX digital SLR cameras*, the O-GPS1 unit records latitude, longitude, altitude, and universal time coordinated (UTC) of shooting locations with captured images. Image files with this GPS data may be used to track shooting locations and review location data on a personal computing device. The GPS location data also helps sort and file recorded images.
* Compatible models are the K-5, K-r and 645D (as of May, 2011).

Some of the O-GPS1's functions may not be available when used with the 645D. Compatible PENTAX digital SLR camera bodies must be updated with the latest firmware version for proper O-GPS1 functionality.

GPS function records shooting location data
The O-GPS1 mounts easily on the hot shoe of a compatible PENTAX DSLR camera to records the latitude, longitude, altitude, universal time coordinated (UTC) and direction of the shooting location onto captured images. Using mapping software such as Google Earth, users may recall shooting locations and directions on a map. GPS functionality also helps sort and file-recorded images.
Note: When the O-GPS1 is used in locations where it cannot receive signals from GPS satellites, location data may be in error or missing.

Astrotracer for astrophotography
The O-GPS1offers the advanced PENTAX original Astrotracer function,* which works with the PENTAX Shake Reduction (SR) system on select cameras for tracking and photographing celestial bodies. The unit calculates the movement of stars, planets, and other bodies using the latitude obtained from GPS data and the camera's alignment data (horizontal and vertical inclinations and aspect) obtained from its magnetic and acceleration sensors. Then, the unit shifts the camera's image sensor in synchronization with the movement of the object(s).** As a result, stars and other bodies are captured as solid points rather than blurry streaks, even during extended exposures. The unit also simplifies astrophotography by requiring only a tripod and eliminating the need for additional accessories such as an equatorial telescope.
* This function is available only when the O-GPS1 is mounted on a PENTAX digital SLR camera body equipped with a magnet-driven SR system.
** The duration of Astrotracer operation may vary depending on photographic conditions.

Electronic Compass function to indicate and record direction
The O-GPS1 features an Electronic Compass function, which displays the camera's direction on its LCD monitor with great precision. Using the aspect of geomagnetism detected by its magnetic sensor and GPS location data, the unit indicates the aspect in relation to true north. Users may record directional data on captured images.