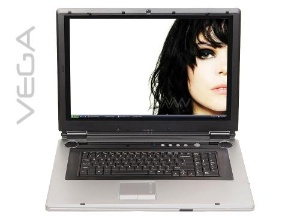 PC MicroWorks Corporation — an emerging high tech computer manufacturer offering the fastest consumer desktops and laptops in the world — today announced the release of its next generation extreme performance 20.1″ super notebook, Vega. The new system is the first notebook ever to feature a Dual Core, SLI capable notebook with up to 4GB of high speed DDR2 memory, up to 600GB of hard disk storage, and the option for a next generation Blu-Ray-RW HD burner.

The Vega will begin shipping immediately in an effort to meet the demands of last minute holiday shoppers looking for an extreme performance mobile computer for that special someone. “Though it may be a little late to make it under the Christmas tree for some shoppers, this impressive new laptop may be worth the wait for others,” stated Timothy Lee, Media Relations Director.

Featuring up to 4GB of RAM, Dual SLI nVIDIA 7950GTX X-TREME GPUs with 1024MB of dedicated graphics memory, and AMD’s advanced new dual core 64 bit Turion 64 X2 TL-60, the Vega Laptop is the most powerful mobile computer available in the industry today for gamers, engineers, and anyone who wants to have the absolute best visual and graphical performance on the go. The Blu-Ray-RW allows the user to play high definition BD movies in full 1080P HD, while also allowing the ability to store up to 50GB per rewriteable BD disk — the equivalent of over 70 standard CDRs. In addition, the new system has a 20.1″ WSXGA+ super resolution wide screen cinema display making the Vega a definite head-turner showcasing a bright and vibrant image unmatched by the competition.

With specifications that make this laptop more powerful than most desktops, the Vega is ready to handle just about anything with ease. Included with this notebook are not one, but two of the fastest currently available mobile graphics solutions, giving this system the ability to achieve higher frame rates and a more brilliant picture than any other laptop on the planet.

The Vega marks a milestone in mobile performance, as never before has a laptop had both a dual core processor and dual graphics cards in a single solution with such robust customization options. Another record is broken by Vega, which allows up to 600GB of hard drive disk storage; never before has this massive amount of storage been offered in the mobile community. In addition, the company is launching the new model with the ability to configure it with up to 4096MB of DDR2 667Mhz memory, which is unheard of in the mobile computer industry. With the upcoming release of Microsoft Windows Vista, the Vega laptop is very well equipped to maximize the new operating system’s capabilities. All Vega laptops will include a coupon to upgrade to Vista at no additional charge.

About PC MicroWorks Corporation
PC MicroWorks Corporation is positioning itself to become the leading authority in the high-end computer industry. Featuring more powerful computer systems than any other manufacturer in the world, PC MicroWorks Corporation is proud to be a true innovator in the global technology market. Pushing the boundaries of hardware beyond the traditional limits, the company is consistently striving to bring faster technology, more options, and better service to its customer base and is now becoming recognized as the go-to computer manufacturer for cutting edge technology solutions. For more information and product details, please visit http://www.pcmicroworks.com or call 1-888-59-MICRO (64276).