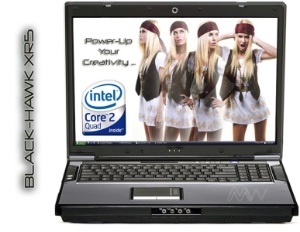 The new Black-Hawk utilizes the breakthrough Intel quad core architecture previously available only in desktops and allows for more efficient multitasking, quicker encoding/rendering times, and faster overall system performance on the go. In addition to the quad CPU and dual video cards, the XR5 can house up to 3 SATA 300 hard drives in a RAID array and 4GB of 800 MHz DDR2 system memory. “We are excited to see the boundaries between desktop and notebook performance levels converge even further with the new system release. The XR5 will give even the most extreme desktops a run for their money,” stated Steve Young, VP of Operations.

Traditionally, a laptop is based on a mobile system architecture different from the platform used in desktops; however, the XR5 is one of few notebooks based on the desktop platform giving it greater flexibility in both configuration and upgradeability of the system as well as greater performance levels across the board. The new Black-Hawk systems utilize the more powerful desktop chipsets and CPUs to significantly boost system performance. In addition, the XR5 is more scalable than traditional notebooks in that it has the ability to upgrade the standardized PCI express graphics card(s), CPU, RAM, Hard Drives, and more as faster technology is made available. The product life cycle of these open architecture notebooks is generally extended far beyond that of traditional notebooks more commonly found on the market.

The new notebook will feature a custom carbon fiber top accented by piano black gloss finishes across the notebook to enhance the appearance and add to the exclusivity of the unit. The XR5 will be the most powerful consumer notebook for the 2007 holiday season, and will begin shipping in December with pre-orders being taken now.

About PC MicroWorks Corporation
PC MicroWorks Corporation is positioning itself to become the leading authority in the high-end computer industry. Featuring more powerful computer systems than any other manufacturer in the world, PC MicroWorks Corporation is proud to be a true innovator in the global technology market. Pushing the boundaries of hardware beyond the traditional limits, the company is consistently striving to bring faster technology, more options, and better service to its customer base and is now becoming recognized as the go-to computer manufacturer for cutting edge technology solutions. For more information and product details, please visit http://www.pcmicroworks.com or call 1-888-59-MICRO (64276).