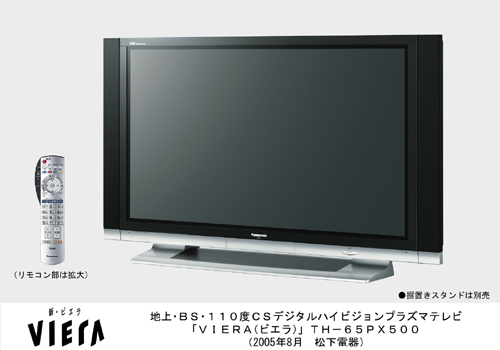 “Demand for plasma TVs is growing dramatically and plasma TV shipments in Japan exceeded 340000 units by the end of March 2005. The number is expected to almost triple to one million units in the next two years as digital terrestrial broadcasting reaches more than 10 percent of Japanese households by the end of December 2005. We expect the Winter Olympic Games in Turin next February to also drive the demand.”

“We currently have a 70 percent share in the domestic plasma TV market for 37 inches and larger and about a 40 percent share of the overall flat-panel TV market,” Mr. Ushimaru said.

The high-end model of the VIERA TV line has two built-in digital and two built-in analog tuners. As it has an SD Memory Card slot, users can watch one digital channel while recording another onto the SD Memory Card (in MPEG4 format) without using a separate recording device. They can watch recorded programs on SD-compatible devices such as D-snap SD Multi Cameras and mobile phones.

The TH-65PX500 has an HDMI (High Definition Multimedia Interface) port for an easy single-wire digital audio and video connection.

Panasonic has also added a low-cost and energy-efficient VIERA PX50 digital HDTV series. The 50-inch TH-50PX50, 42-inch TH-42PX50 and 37-inch TH-37PX50 feature the same PEAKS System (a plasma panel, processor and driver) as the higher-models in the PX500 series to ensure superb picture quality. The new models use up to 43 percent less power per year on average as compared to the PX300 series. The new PX50 models have realized the compact design, reducing the width by 70 mm with speakers being placed below the PDP screen.

The models have an SD Memory Card slot, providing connectivity with other SD-compatible devices. Photos taken with LUMIX digital still cameras can be displayed in a slide show format on the large VIERA TVs.

All four models incorporate a Deep Black Filter on the surface of the protection glass to suppress external glare and reflection. Panasonic’s own Real Black Drive System provides a contrast ratio of 3000:1 in dark areas, achieving exceptionally deep and rich blacks. The panels have a long life of about 60000 hours. All the models come with easy-to-use remote controllers and can access Panasonic’s T-Navi portal service.

About Panasonic
Best known by its Panasonic brand name, Matsushita Electric Industrial Co., Ltd. is a worldwide leader in the development and manufacture of electronic products for a wide range of consumer, business, and industrial needs. Based in Osaka, Japan, the company recorded consolidated net sales of US$81.44 billion for the year ended March 31, 2005. The company’s shares are listed on the Tokyo, Osaka, Nagoya, New York (NYSE:MC), Euronext Amsterdam and Frankfurt stock exchanges. For more information on the company and the Panasonic brand, visit the company’s website at http://panasonic.co.jp/global/index.html.