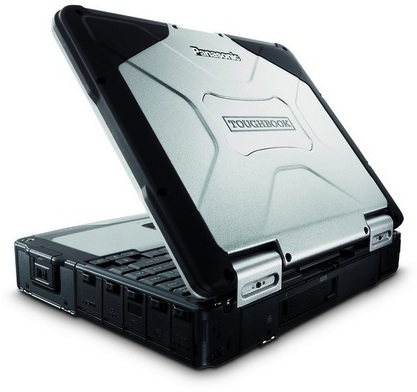 Panasonic today announced a series of upgrades to its Toughbook 31 fully-rugged laptop. The updated device features new Intel Core i5 and i3 processors, increased RAM and hard drive capacity as well as speed, up to 20 hours of battery life, a brighter sunlight-viewable screen and more. With these improvements, the MIL-STD-810G and IP65 certified Toughbook 31 continues to be the ideal solution for mobile professionals in mission-critical environments, including first responders, military personnel, and field workers in industries such as telecommunications, utilities and energy.

Now powered by a new Intel Core i5 (2540M or 2520M depending on the model) or i3 (2310M) processor, the Toughbook 31 delivers desktop-class performance alongside its world-class reliability. The availability of discrete graphics from an ATI Radeon HD6750 card also delivers significant improvements in 3D graphics, important for GIS and other graphic-rich applications.

The Toughbook 31 is the sixth generation of flagship Toughbook clamshell notebooks, which have been the gold standard in rugged computing since 1993, boasting the lowest failure rates in the industry. The device is certified by an independent third party testing lab to meet nineteen MIL-STD-810G tests, including shock, drop, vibration, extreme temperature and high altitude. In fact, the Toughbook 31 offers protection from drops of up to six feet and has achieved an IP65 rating for unparalleled protection from water and dust. The device also meets requirements for use high-vibration (ASTM D4169-04) environments.

“The Toughbook 31 is used in some of the most demanding environments laptops can be found in,” said Kyp Walls, director of product management, Panasonic Solutions Company. “On top of that, failures and poor performance have significant, real-world consequences to our customers in markets like public safety, the military and utilities. The improvements made to the Toughbook 31 allow us to exceed the ever increasing demands of our customers, allowing them to do their jobs with one less thing to worry about.”

The 13.1-inch XGA LCD touchscreen on the Toughbook 31 features optional Panasonic CircuLumin technology, allowing for full-circle viewability from the brightest sunlight to pitch darkness. Panasonic has increased the brightness on the standard screen to 1,200 nits, offering excellent viewability, even in direct sunlight. Screen brightness can also be dropped as low as 2 nits for concealed nighttime use which is critical to the safety of military and public safety users.

By leveraging Panasonic's advanced battery technology, the Toughbook 31 now offers up to 13.5 hours of battery life despite its brighter screen and more powerful processor. With the optional extended life media bay battery, the device can deliver up to 20 hours of life.

Embedded Wireless Connectivity
The Toughbook 31 offers a variety of embedded wireless technologies, including Wi-Fi 802.11a/b/g/n, optional Bluetooth 2.1 and Gobi2000 3G mobile broadband technology from Qualcomm. The device is certified on the AT&T, Sprint and Verizon Wireless 3G networks, allowing workers to stay connected virtually all of the time. With certifications coming later this year, the Toughbook 31 will also offer embedded support for 4G networks.

Pricing and Availability
The upgraded Panasonic Toughbook 31 will be available worldwide starting June 2011 for $3,299 with a full three-year limited warranty, parts and labor, providing coverage wherever the unit may be deployed.