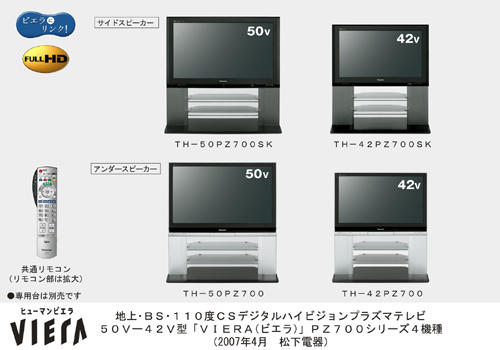 Panasonic, the leading brand for which Matsushita Electric Industrial is well known, today introduced the new high-end PZ700 Series of 1080p resolution VIERA plasma TVs including two 42-inch and two 50-inch models. The 42-inch models are the smallest screen size plasma available in the full high-definition TVs. The new models add more choice in the Panasonic 1080p plasma TV family ranging from 42 inches to 103 inches. These four models will be available in Japan on April 27.

With a moving-picture resolution of over 900 lines1), the 1080p VIERA TVs deliver not only outstanding still images, but also display high-speed moving images like Olympic Games and Formula One car racing clearly and sharply. The four models feature a newly-developed anti-glare panel that reduces screen glare and reflective light that could occur in a bright environment.

Panasonic has also successfully packed as many as 2.07 million (1,920 x 1,080) pixels into the 42-inch panel by developing thinner ribs2) and new fluorescent materials. The thin ribs improve the aperture ratio of each tiny pixel cell, so that the New 1080p Full HD PEAKS (Picture Enhancement Accelerator with Kinetic System) Plasma Panel offers the same brightness as the current 42-inch HD model (TH-42PX600).

Mr. Masaaki Fujita, Senior Vice President of Panasonic AVC Networks Company, who is in charge of global plasma TV business, said, “We are proud to say that we have achieved this high level of quality because we produce and assemble every key device in-house from processors and drivers to panels. This summer our fourth plasma plant starts operation, which will bring our total monthly capacity to 960,000 panels3) when it reaches full capacity in 2008. Another new plant will start operation in 2009. When the fifth plant reaches full capacity, our total capacity should reach 1.96 million panels a month.”

Despite being full of advanced features, the new VIERA TVs are easy to use. They inherit the popular and convenient VIERA Link that lets viewers control other compatible AV equipment such as Panasonic DIGA DVD recorders and home theater systems with a single remote control.

The new models support the “acTVila” IP-based network services for TVs in Japan. Just by pressing the “acTVila” button on the remote control, users can access, over broadband Internet, a wide variety of information including the latest news, quotes, weather, maps, popular consumer products, etc. Further, Panasonic digital TV users can access “Panasonic TV Square” from the “acTVila” home page. The Square is designed to provide useful information for everyday living such as security advice issued by local police and recipes and information on health, ecology and Panasonic’s new products. Even Karaoke songs are downloadable from the Square.

“Our VIERA serves at the center of an AV entertainment network. Our TVs can also play a role in bringing family members together in the living room,” said Mr. Ushimaru. “A whole family can not only sit in front of the large-screen TV for viewing high-quality images but also use it to share pictures, videos and movies as well as access network services.”

The 42-inch TH-42PZ700SK and TH-42PZ700 and the 50-inch TH50PZ700SK and TH-50PZ700 come with an SDHC (SD High Capacity) memory card slot that lets users view on a large-screen TV, photos or AVCHD standard videos shot with a LUMIX digital still camera or HD video camera. Just by placing the card in the slot, it is ready for playing without a hassle of wiring.

The human-friendly TVs are also designed for low environmental impact. Panasonic is the first TV manufacturer to eliminate lead from plasma panels. The VIERA plasma panels promise a long life of approximately 60,000 hours4), that means 20 years when viewed eight hours a day. They also feature speakers with diaphragms using paper made of bamboo fiber. Conventional diaphragms use paper made from softwood. As bamboo grows much faster than softwood, using bamboo also contributes to conserving natural resources.

Panasonic also introduced six models of the new PX70 Series of VIERA plasma high-definition TVs on the same day. They come in 37 inches (TH-37PX70SK, TH-37PX70S, TH-37PX70), 42 inches (TH-42PX70SK, TH-42PX70) and 50 inches (TH-50PX70). All six models have the anti-glare New PEAKS Panel that offers moving picture resolution of over 720 lines. The TH-37PX70SK and TH-42PX70SK will ship on April 27, the other four models on April 20. All ten models in the PZ700 and PX70 Series support terrestrial, BS and 110 degree CS digital broadcasts.
1) Measured with a system developed by the Advanced PDP Development Center (APDC). The system simulates the way human eye works.
2) A “rib” divides each gas cell and prevents interference between adjacent cells to produce clear images.
3) Based on 42-inch screen size
4) Represents “half life” the time until panel brightness is reduced to half its initial level when displaying moving images at standard mode.

About Panasonic
Best known for its Panasonic brand name, Matsushita Electric Industrial Co., Ltd. is a worldwide leader in the development and manufacture of electronic products for a wide range of consumer, business, and industrial needs. Based in Osaka, Japan, the Company recorded consolidated net sales of US$76.02 billion for the year ended March 31, 2006. The Company’s shares are listed on the Tokyo, Osaka, Nagoya and New York (NYSE:MC) stock exchanges. For more information on the Company and the Panasonic brand, visit the Company’s website at http://panasonic.net/. 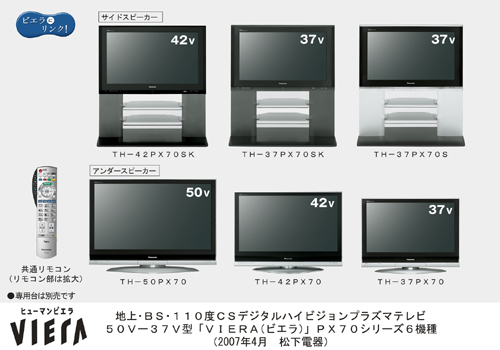