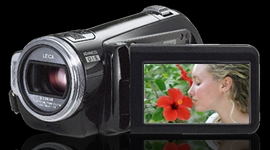 Panasonic, the leading brand by which Matsushita Electric Industrial Co., Ltd. is known, today announced three new models of 3CCD full high-definition camcorders that record detailed moving images with 1920 x 1080 pixel definition. The HDC-SD7, the smallest and lightest full-HD video camera to date, and HDC-SD5, record onto SD Memory Cards. The HDC-SX5 uses DVD discs in addition to SD/SDHC Memory Cards, the first of its kind in the world. The new camcorders offer both compactness and superb images; they can go everywhere users go and the recorded images look strikingly beautiful on a high-quality large screen TV. The HDC-SD5 and HDC-SX5 will be available from August 25 and the HDC-SD7 from September 8 in Japan.

“Panasonic made an epoch in home videos when we introduced the HDC-SD1, the world’s first SD/SDHC Memory Card based HD camcorder, last year. Because SD-based camcorders contain no moving parts for capturing and storing images, they offer outstanding resistance to impact and dust. By employing the SD/SDHC Memory Cards, we made camcorders more compact, light, durable, easy to use and versatile with connectivity with other audio-visual equipment with SD/SDHC card slots. The new models push the boundaries of HD home video even further,” said Mr. Shigenobu Hirahara, Associate Director, Corporate Marketing Division of Panasonic Brand in Japan.

The hybrid-type HDC-SX5 can record an additional 60 minutes of HD video onto a DVD-R dual layer (DL) disc, allowing it to record up to 150 minutes of HD video when both 4GB SDHC Memory Card and DVD-R DL are used[1]. The HDC-SX5 features an easy, one-touch copy function that enables the user to copy video clips from an SD/SDHC Memory Card to a DVD disc by simply pressing the “Disc Copy” button without using a PC or other equipment.

As with every Panasonic camera, an optical image stabilizer is included as a standard feature. The Advanced O.I.S. (Optical Image Stabilizer) incorporated in the new camcorders detects and compensates hand-blur about 4,000 times a second, eight times more frequently than the previous models, the HDC-SD1 and HDC-DX1. This reduces blurry images caused by unsteady hands to about one third[2]. This system is essential for full-HD recording and viewing as the finer the resolution becomes, the blurrier images become on a large-screen HD TV. The new camcorders feature 10x optical zoom Leica Dicomar lens that is designed for crisp, clear HD recording.

The three camcorders also feature a smart Pre-Rec function that helps the user to capture the anticipated sudden movement. When the Pre-Rec function is on, the camcorder records three seconds of images into an internal memory, before recording onto the SD/SDHC Memory Card begins. Then, when the record button is actually pressed, it will start recording onto the SD/SDHC Memory Card the entire scene including the three seconds of the images in the internal memory. This function allows the user to “go back” and capture the precious moment that would have otherwise been missed.

Panasonic (Matsushita Electric Industrial)
Best known by its Panasonic brand name, Matsushita Electric Industrial Co., Ltd. is a worldwide leader in the development and manufacture of electronic products for a wide range of consumer, business and industrial needs. Based in Osaka, Japan, the company recorded consolidated net sales of US$76.02 billion for the year ended March 31, 2006. The Company’s shares are listed on the Tokyo, Osaka, Nagoya and New York (NYSE:MC) stock exchanges. For more information on the company and the Panasonic brand, visit the Company’s website at http://panasonic.net/.