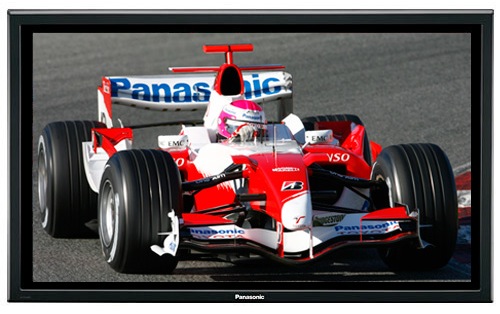 Panasonic, a leader in High Definition technology, announced that the critically-acclaimed, 103-inch Plasma Full High Definition 1080p Display — the world’s largest Plasma commercially available — will now be priced at $50,000. When it debuted in December 2006, the made-to-order HD Display was priced at $69,999.95.

With widespread acclaim for its size and picture quality, Panasonic’s 103-inch Plasma has become the industry’s leading high-impact, large-format display for a wide range of commercial and home theater applications — from digital signage and entertainment, to high-end home theater, command and control and higher education. Since its debut, more than 6,000 Panasonic 103-inch HD Displays have been installed worldwide, far exceeding initial expectations.

“The combination of advancements in Plasma production technology and the tremendous worldwide success of the Panasonic 103-inch Plasma HD Display over the last two plus years have enabled us to increase production as well as efficiencies, and thereby make it available to a wider range of customers at a lower price point,” said Andrew Nelkin, President of Panasonic Professional Display Company. “When our 103-inch Plasma first debuted, it was a made-to-order product. It soon became obvious that in ultra-large screen sizes, nothing comes close to the Panasonic 103-inch Plasma in delivering crisp, clear, blur-free images in 1080p High Definition. Demand for the 103 exceeded our initial expectations, and its popularity continues.”

The Panasonic 103-inch HD Plasma Display has been installed in a wide range of high-visibility commercial applications in the U.S. including:

The TH-103PF10UK can support up to a 5 x 5 video wall natively — the largest in the industry — and also provides new video processing capabilities to further sharpen the image when displaying low resolution content or when zooming the image in video wall applications. Its new Portrait Zoom function lets you display one horizontal image across three vertically-mounted 103-inch plasmas for an incredibly impactful visual of over 90 square feet.