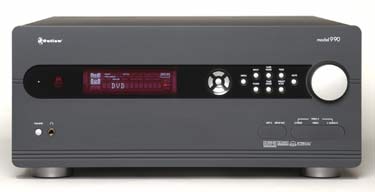 The Outlaw Audio Model 990 full-featured audio-video controller for music and Home Theater is now available for a mere $1099, and only from outlawaudio.com

NEW YORK (4/28/05) — Outlaw Audio, the world’s oldest audio-video equipment brand selling exclusively on the Internet, has introduced and announced immediate deliveries of its Model 990, a remarkably affordable 7.1-channel audio-video controller and processor for music and home theater. The announcement was made at a press conference at the Home Entertainment Show, which opened here today.

“Bang for the buck is what Outlaw Audio is all about, and the 990 is outstanding example of that,” commented the chief Outlaw. “We’ve been working on this in secret for three years, and we are now ready to unleash it on the public. Never before have so many performance and interface capabilities been offered at such a reasonable price.”

The Outlaw Audio 990 provides the user with total control over all the inputs from a variety of audio and video source components, ranging from high-definition satellite TV receivers, advanced DVD players, and cable TV to old-fashioned phonograph players and VCRs. It uses state-of-the-art surround sound processing from Dolby and DTS to create an intensely realistic acoustic environment in the home that is superior to that of most commercial movie theaters.

In addition to superior sound and picture quality, the Outlaw Audio Model 990 includes automatic loudspeaker setup and calibration using an included microphone. It has USB and RS-232 computer connections that allow easy upgrading of system software and firmware. The USB port can also be used as an audio source connection, allowing the processor to play PCM audio files streamed from a computer. It also has a high performance AM/FM tuner with 30 station presets, and direct access tuning via the included backlit programmable remote control. For integration with home automation and control systems, there is an RS-232 port, IR input and output jacks, and two 12-volt trigger outputs. There are also significant multi-room capabilities with a second remote control provide for Zone 2.

The Outlaw Audio Model 990 will be available in May exclusively through the company’s website at www.outlawaudio.com. It will have an introductory price of just $1099.

Privately owned, Outlaw Audio was founded in 1999 by a small group of consumer electronics industry veterans. The Outlaws design high-performance, high-value consumer electronics products and market them exclusively via the Internet from their www.outlawaudio.com website. Outlaw Audio and its products have earned numerous major awards and “Recommended Component” ratings from major publications. The company is widely regarded by audiophiles around the world for quality, performance, and excellent customer service.