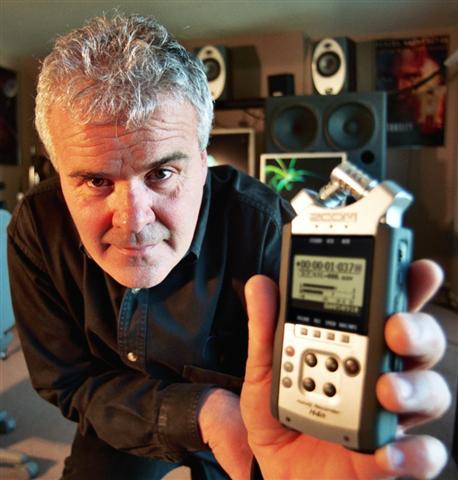 Frank Serafine is one of the most well-known and revered sound designers in Hollywood. A veteran of over 30 years, Frank has contributed his audio expertise to landmark films such as Field of Dreams, Star Trek, Tron and The Hunt for Red October, for which he shared the Academy Award for sound editing.

Now, during production of the new film Hole in the Head, he is using Zoom’s H4n recorder exclusively to record on the set of this groundbreaking documentary. Serafine is the first person in the world to put the new H4n recorder through its paces in one of the most professionally challenging settings possible.

As a long time user of Zoom’s first two recorders, he was already familiar with the performance and audio quality of the company’s products. “This new H4n has such great audio quality; it really levels the playing field for everyone. Now, a computer and an H4n are all you need to do professional sound for a movie,” notes Serafine.

“I’m using the H4n everyday,” he says. “We record all the dialogue on the set with it. I use my external mics on channels one and two and at the same time, I use the onboard mics to record room ambiance. On break, we move all the audio files using a card reader… This is the way sound will be done in future media production,” added Serafine.

With a host of features intent on improving audio quality and user experience, the H4n takes functionality to the next level. As Zoom’s most sophisticated handheld recorder to date, it’s poised to become one of 2009’s most versatile audio products in a number of applications.

“We’re really excited to have an artist with the stature of Frank Serafine debuting the H4n on location and relying on it to create sound for such an important film,” says Samson Director of Marketing Mark Wilder. “Even better, to have an Oscar winning sound designer so enthusiastic about the results is a tremendous honor.”

About Samson Technologies Corporation
Samson Technologies Corporation designs, manufactures and distributes high-performance audio, wireless and music accessory products in the United States and 106 countries abroad. Samson is well-known as a leading audio technology company with a long history of successful products in the professional audio segments as well as the mainstream consumer markets. Additionally, Samson is also the exclusive worldwide distributor of Hartke products and the exclusive U.S. distributor of Zoom recording and signal processing electronics. Founded in 1982, Samson Technologies is a privately held company based in Hauppauge, NY.