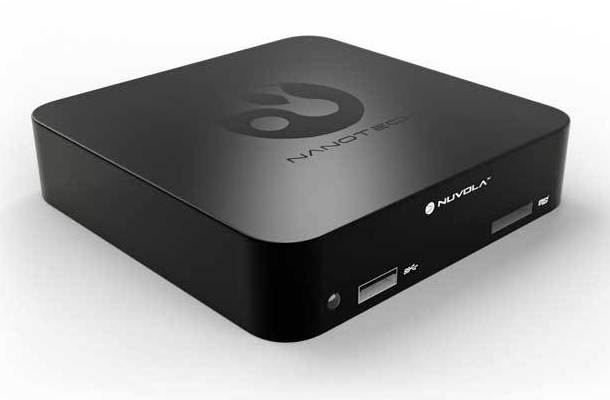 NanoTech Entertainment (NTEK) just announced they have started manufacturing the Nuvola NP-1 4K Ultra HD Media Player, powered by the nVidia Tegra 4 processor with Google’s Android operating system for consumers, priced at $299. A commercial 4K player, model NP-C, is also in the works for $699, which offers built in Ethernet, state of the art 2×2 Wi-Fi, and Bluetooth.

The Nuvola NP-1 can be used to decode a variety of video formats and resolutions including 4K Ultra HD, HD, SD and 3-D movies as well as playing state-of-the art 3-D Video games. Because it runs on Android, the Nuvola can also run thousands of existing apps on your television. It can also stream content from a variety of sources, including the bundled UltraFlix UHD channel which serves 4K content for streaming and other services such as Netflix, Hulu Plus, XBMC, Amazon Instant Video and YouTube, which come pre-installed.

The Nuvola NP-1 can be connected via Ethernet or Wi-Fi to any network. Users with 6Mbit/s or greater Internet connections can view videos in full 4K Ultra High Definition. Commercial users can use the Nuvola NP-1 to drive digital signage TV in 4K Ultra HD at a fraction of the price of current HD players.