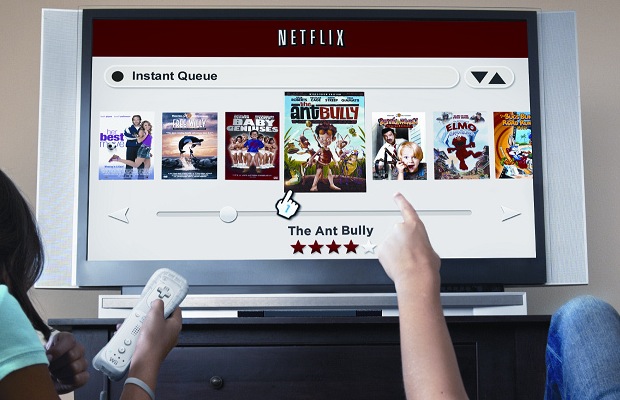 Nintendo of America Inc. and Netflix, Inc. announced that Netflix members who own Nintendo’s Wii™ home console can now enjoy thousands of movies and TV episodes streamed from Netflix via Wii. The two companies announced partnership plans in January and are making Netflix on the Wii console fully available as of today.

Streaming from Netflix via the Wii console is provided at no additional cost to Netflix members who have a plan starting at $8.99 a month, a Wii console and a broadband Internet connection.

The partnership between the two companies dramatically increases the reach of content streamed from Netflix. Wii remains the fastest-selling home console in history. Wii now reaches more consumers than any other device that currently supports streaming movies from Netflix, which had 12.3 million members at the end of 2009.

The launch of Netflix on Wii gives people the opportunity to gather with friends and family for a movie and game night. Everyone can join in the fun of a few heated rounds of Wii Sports Resort™ bowling before loading up a movie. When the movie’s over, everyone can try out some table tennis — all on the same Wii console. The addition of Netflix streaming to the Wii console’s already wide range of capabilities makes it even more appealing for group enjoyment.

“More than 28 million people already use the Wii console to play games, stay fit and have fun,” said Nintendo of America President Reggie Fils-Aime. “Now they have another reason to use the system every day — to enjoy great movies from Netflix and other video content.”

“Launching Netflix on the Wii home console marks a significant advance in the evolution of our service,” said Netflix co-founder and CEO Reed Hastings. “Wii has created immense consumer excitement and has meaningfully altered the consumer electronics landscape. Bringing Netflix to Wii catapults us toward our goal of being ubiquitous on the connected devices most popular with consumers.”

Netflix continues to expand the ways in which its members can watch movies and TV shows streamed directly to TVs via a range of Netflix-ready devices such as the Wii console. With unlimited memberships starting as low as $8.99 a month, members can instantly watch unlimited movies and TV episodes streamed from Netflix and can also receive unlimited DVDs delivered quickly to their homes. In parallel, consumers continue to demonstrate a preference for Wii consoles and the great value they offer in fun games and shared experiences at a suggested retail price of just $199.99. Wii is the only video game system currently available with motion controls, which are included with the system at no extra charge.

To enable their systems to stream TV shows and movies from Netflix, Wii owners will need a broadband Internet connection, a Netflix unlimited membership and a Netflix instant streaming disc for the Wii console. Netflix members and Wii console owners can now receive a free instant streaming disc by going to www.netflix.com/wii. The discs will be delivered for free by first-class mail, generally one business day after they are requested.

When the instant streaming disc is inserted into a member’s Wii system, an array of movie and TV choices will be displayed right on the TV screen. These titles will be conveniently organized into a variety of categories based on members’ personal preferences and will include popular genres, new arrivals and members’ individual instant Queues. Using the Wii Remote™ controller, members will be able to choose a movie or TV episode to watch from their instant Queues or pick one directly from any of the lists. They will also have the ability to read synopses, rate movies, and will have the option of fast-forwarding and rewinding their selection.

The Netflix functionality adds another dimension to the Wii console’s diverse online features. With broadband Internet access, the Wii console gains access to a variety of entertainment, information and communication channels that add value to the system and make it a device the entire family can enjoy. For instance, Wii owners of all types can find great games from among hundreds of downloadable new and classic titles with Wii Points™ from the Wii Shop Channel. Or surf the Internet on the big screen via the Internet Channel, watch videos about new and upcoming games on the Nintendo Channel, and play specially designed games online with friends near and far.