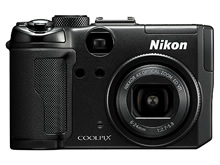 “We are eager to see the response to the integration of the new capabilities for COOLPIX cameras, as the demands of our consumers are always a priority in product design,” said Bill Giordano, general manager marketing, COOLPIX for Nikon Inc. “The P6000 is an exciting product offering for Nikon’s COOLPIX line, as it not only provides expanded creative control for photo enthusiasts, but also empowers them with GPS functionality and my Picturetown connectivity.”

The P6000 knows where the “best shots” are taken, thanks to the integration of the new GPS unit. With the added GPS function, P6000 users will be able to record “geotags” of the location where their images are captured based on latitudinal and longitudinal coordinates. This further heightens the photographic experience, allowing users to pinpoint the location via maps available in Nikon ViewNX Software, my Picturetown, Nikon’s photo sharing and storage website, or any other software or website that recognizes GPS data.

Additionally, the P6000 makes my Picturetown connectivity for uploading and sharing photos simple and easy, thanks to added wired LAN support via a dedicated Ethernet port built into the camera. Users can upload their images and data directly from the P6000 with an Ethernet cable to the secure Picture Bank service on my Picturetown.

The P6000 features a quality finish and a front panel constructed of solid Magnesium alloy, as well as a comfortable grip and well-placed controls for streamlined performance. The new P6000 camera is compatible with new high-capacity SDHC cards, and utilizes a Nikon EN-EL5 rechargeable Li-ion battery. The P6000 also comes bundled with the COOLPIX Software Suite for editing, organizing and sharing images.

* COOLPIX Picture Control NRW (RAW) files can only be processed in-camera. NRW (RAW) files are compatible for use in-camera, with ViewNX (Windows version only, available early October 2008) or with WIC-based applications. Capture NX, Capture NX2 and NEF files are not compatible with NRW (RAW) images.
** Estimated selling price listed is only an estimate. Actual prices are set by dealers and are subject to change at any time.