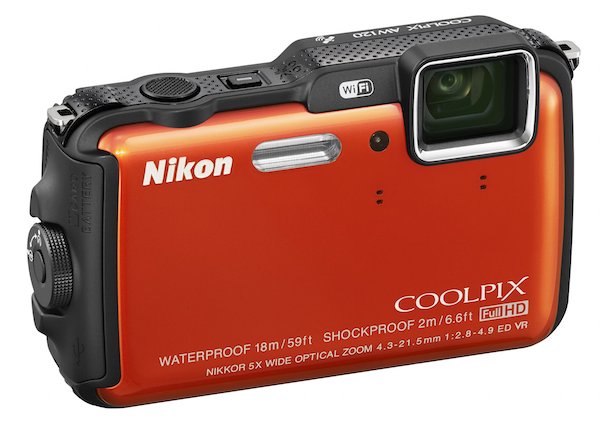 Equipped with GPS technology, the COOLPIX AW120 lets the user track their exploration down to the exact longitude and latitude of where an image was captured. Explorers can also stay connected when they’re “off the grid” with built-in mapping and an Electronic Compass to help navigate the unknown. Built-in Wi-Fi connectivity allows the user to seamlessly transfer images or HD video of any adventure to compatible smart devices for easy sharing of quality imagery to their social networks, friends and family.

The COOLPIX AW120 features a 16-megapixel CMOS sensor that helps preserve adventurous moments that are worth reliving in stunning photos and Full HD 1080/60i video. Furthermore, a wide angle 5x (24-120mm) optical zoom lens and 10x Dynamic Fine Zoom with Hybrid Vibration Reduction (VR), a fast f/2.8 maximum aperture and about 6.9 frames per second (fps) continuous shooting ensure that photos and videos are captured in clear detail, despite the distance or tumultuous climate the explorer may be in. Knowing that operating a camera should not stop an excursion, the COOLPIX AW120 sports an intuitive graphic user interface and Nikon’s Action Control function that allows seamless operation with gloved hands. To help frame stunning photos and HD videos, the COOLPIX AW120 sports a bright 3.0-inch (7.5cm) high-resolution OLED monitor as well.

Additionally, the AW120 can be mounted to a new chest harness that allows the user to securely fasten the camera around their chest, which is helpful when capturing exciting stills and videos from a unique in-the-action point of view. The COOLPIX AW120 can also be fitted with optional silicone jackets that provide a second layer of protection as well as a stylish new look. The silicone jackets will be available in several different colors including Black, Orange, Blue and Khaki.

Price and Availability
The Nikon COOLPIX AW120 will be available in March 2014 in Orange, Blue, Black and Camouflage for $349.95.

This video was shot using the COOLPIX AW120 in the Indonesia ocean and snowy slopes in Japan.

Reviewed.com7 years ago
You Are Here