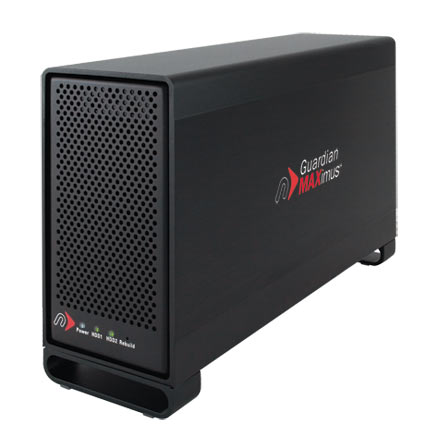 January 18, 2008, Woodstock, IL — Newer Technology, Inc. (NewerTech) www.newertech.com, the leading developer of Macintosh, iPod, and iPhone performance upgrades and accessories, today announced that the Guardian MAXimus, the first low-cost FireWire and USB 2.0 External RAID-1 storage for consumers and professionals, was named as a winner in the prestigious 2008 Macsimum Macworld Awards. The award was presented January 17 as part of the 24th Annual Macworld Expo & Conference, held January 14-18, at the Moscone Center, San Francisco.

The 3rd Annual Macsimum Macworld Awards recognized companies that brought the best of the best to Macworld. In its awards announcement, the Macsimum News site called NewerTech’s Guardian MAXimus, “the fastest drive with the biggest oomph in the smallest form we’ve seen.” Macsimum News site founder Dennis Sellers added, “We found the Guardian MAXimus offered the best performance and most power for its size.”

“We are pleased to receive the recognition for the Guardian MAXimus” said NewerTech President Larry O’Connor. “Bringing high quality products like this to the Mac community is what NewerTech is all about, and we will continue to do so.”

The NewerTech Guardian MAXimus 2008 Macsimum Macworld Award comes straight off the heels of the Guardian MAXimus being honored as a Finalist in the Storage Visions 2008 Awards, announced last week at 2008 Consumer Electronics Show. The Guardian MAXimus was honored at that time for advancing the state of the art in storage technologies utilized in consumer electronics, the media and entertainment industries, and visionary products for the digital content value chain.

In addition to the 2008 Macsimum Macworld Award and Storage Visions 2008 Finalist Award honors, the NewerTech Guardian MAXimus has also received numerous awards and accolades since it was introduced in May 2007, including awards from: The Mac Observer; MyMac.com; American Photo; and Photoshop User magazine. In awarding Guardian MAXimus its top Five Star Rating in the December 2007 issue, Photoshop User said, “Easy to use, incredibly fast, and offers a lot of space for the price … the perfect space-to-speed ratio that’s so important to graphics professionals, digital photographers, and designers.”

Guardian MAXimus is available immediately in seven pre-configured solutions, from 250GB to 1TB, priced starting at $319.99 MSRP from NewerTech’s exclusive distributor, Other World Computing, as well as through the retail channel. The 0GB “Add Your Own Drives” kit is also available for $149.99 MSRP. Guardian MAXimus is compatible with Apple OS 8.6 to 9.2.2, OS X 10.1.x and later (10.2 or later required for FW800 and USB 2.0), and Windows ME and later operating systems. It includes ProSoft Engineering Data Backup 3, NovaStor NovaBACKUP, and Intech SpeedTools Utilities software (a $200 retail value). For more information, see http://www.newertech.com/products/
gmax.php.

Since 1984, Newer Technology, Inc. (NewerTech) has been recognized worldwide as the leading developer of high performance upgrades for Macintosh notebook and desktop computers, Intel Macs, iMacs, iPods, iPhones, and MacOS compatibles. NewerTech is headquartered in Woodstock, Illinois. Dealer inquiries are welcome by calling 815-308-7001 or by emailing sales@newertech.com.