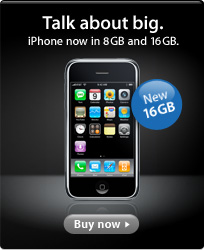 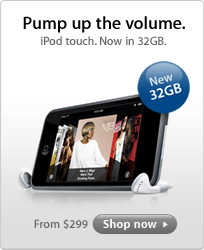 “For some users, there’s never enough memory,” said Greg Joswiak, Apple’s vice president of Worldwide iPod and iPhone Product Marketing. “Now people can enjoy even more of their music, photos and videos on the most revolutionary mobile phone and best Wi-Fi mobile device in the world.”

Both iPhone and iPod touch feature Apple’s revolutionary Multi-Touch™ user interface and pioneering software that allows users to find and enjoy all their music, videos, photos and more with just a touch of their finger. All iPhone and iPod touch models include the latest software enhancements announced last month including the ability to automatically find your location using the new Maps application*; create Web Clips for your favorite websites; customize your home screen and watch movies from the new iTunes Movie Rentals. Both iPhone and iPod touch feature the world’s most advanced mobile web browser in the world with Safari™ and great mobile applications including Mail, Maps, Stocks, Weather and Notes.

Apple iPhone 11 — a near-perfect balance of price and features

ZDNetone month ago
Advertisement. Scroll to continue reading.
You Are Here