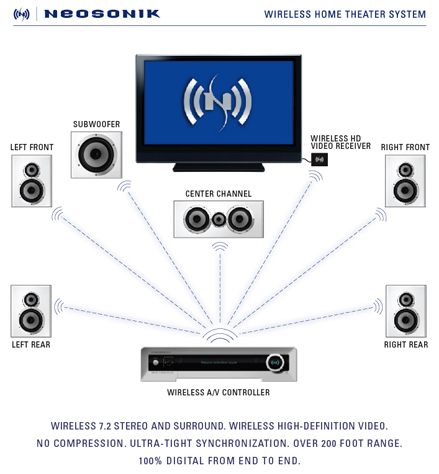 Neosonik, a leading developer of wireless technology for consumer applications, will debut what it says is the world’s first digital wireless home theater system at Suites 30-229/30-231 at the Venetian Hotel for the upcoming Consumer Electronics Show, January 8 through 11 in Las Vegas.

For many years considered an engineering goal of the A/V industry, Neosonik is the first company to wirelessly broadcast not just the rear speakers, but all audio channels in a surround sound system and High-Definition Video. The company claims it can synchronize all audio channels to less than 250 nanoseconds of each other, making it indistinguishable from a wired connection. It also transmits High Definition video to a small device that plugs into the HDMI input of any digital TV to give it wireless capability.

Neosonik states that its system is actually superior to wired systems since it is 100% digital and driven entirely by proprietary Loudspeaker DSP (Digital Signal Processing) and digital amplification. This eliminates all analog components found in conventional home theater and stereo products that cause degradation of the audio and video signals.

The Neosonik system transmits the audio signals without compression, meaning it can maintain CD-quality all the way through to their Digital Wireless Loudspeakers, rather than compress it to MP3 and sacrifice audio quality. The net result is audio fidelity that, according to Neosonik founder and president, Ted Feldman, is “superior to conventional systems up to ten times the price and video quality that is pixel-for-pixel perfect.”

“Customers, retailers and custom installers are all going to love this,” says Feldman. “Too often,” he says, “with a change in audio technology, customers have been forced to trade performance for convenience. This time both convenience and performance improve simultaneously.”

The system completely eliminates all connecting wires between components, meaning no more need for those ugly speaker wires running all over the living room or video cables snaking up the wall into a flat-panel TV. A recent survey by the CEA (Consumer Electronics Association) found that the majority of HTIB (Home Theater in a Box) systems never have their rear speakers hooked up because people don’t want to hassle with running wires to the back of their room. For systems that use ceiling-based Video Projectors, it eliminates the pesky wire installation that runs up the wall and across the ceiling — widely regarded as one of the main barriers inhibiting projector sales.

Neosonik can transmit up to 60 Mbps of A/V data — even through walls — to distances greater than 200 feet, meaning it has the potential to stream to multiple rooms throughout the home. The technology is based on a proprietary wireless chipset that operates in the 5 Ghz frequency band, but it isn’t standard Wi-Fi. According to Feldman, “Wi-Fi won’t work. Wi-Fi was originally designed for computer data, not real-time synchronous streaming. We’ve been chasing this idea for over a decade and have tested every possible technical solution we could learn about. We believe that we have a better understanding of what is needed than anyone else in the industry and that we have created a solution that is performance-based and technologically superior to anything on the market or on engineering drawing boards.”

The dealers who have heard and seen the system agree. According to Antonio Long, owner of AudioVisionSF, the leading High-End A/V store in San Francisco and the first retailer that will carry Neosonik when it ships in June of 2007, “we’ve seen the Neosonik demonstration and it is truly mind-blowing. It has the potential to make everything in our store obsolete.”

About Neosonik
Based in San Francisco, California, Neosonik is the developer of the World’s First Wireless Home Theater System. The company’s patent-pending, proprietary wireless system operates in the 5 Ghz band but is not Wi-Fi. Neosonik has also developed proprietary loudspeaker DSP and digital amplification that will be offered to the industry for license via sales of integrated OEM wireless modules. Neosonik is led by former advertising creative director and audio technologist Ted Feldman, as president, and James Twerdahl, veteran audio industry executive and former president of JBL, Marantz, and Jensen, as chairman. They form the heart of a team with more than 150 years experience in the Audio and Loudspeaker industries. Neosonik is privately held and financed. For more information, visit the Neosonik website: http://www.neosonik.com