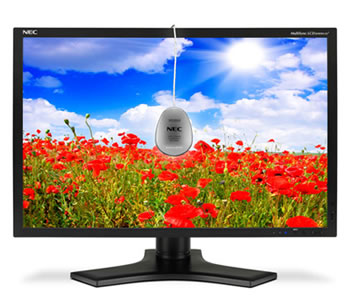 The new MultiSync LCD2690W2-BK-SV and LCD3090W-BK-SV displays can be seen at the 2009 Macworld Conference and Expo (NEC Display Booth No. 2510) today through January 9 at The Moscone Center in San Francisco, Calif.

The SpectraViewII Color Calibration Solution combines the two award-winning displays with a color measurement sensor and sophisticated software. The result is a highly accurate, reliable, repeatable and feature-rich display calibration and profiling solution. The SpectraViewII system, available for Mac OS and Windows, uses a custom-calibrated, co-branded colorimeter based on the iOne Display 2 from X-Rite, to take color measurements of the display screen during calibration.

The software analyzes these measurements and sends color adjustment commands directly to the display monitor, allowing the full color resolution and fidelity of the system to be maintained. The new sensor is custom manufactured and matched for wide color gamut displays, like the recently introduced MultiSync LCD2690WUXi² and LCD3090WQXi, in order to provide the most precise measurements possible with a colorimeter device. The sensor is also compatible with standard gamut LCD displays.

“The new MultiSync LCD2690W2-BK-SV, LCD3090W-BK-SV and SVII-PRO-KIT deliver the most advanced technologies for enhanced desktop color performance,” said Will Hollingworth, Senior Manager of Software Development for NEC Display Solutions. “When combined with the SpectraViewII Color Calibration Solution, select NEC LCD displays revolutionize the way flat-panel monitors can be used. With its multitude of award-winning and leading-edge capabilities, the two new displays and accompanying SpectraViewII Kit deliver advanced functionality that could easily be considered the most intelligent visual display solutions to date.”

The MultiSync LCD2690W2-BK-SV, LCD3090W-BK-SV and SVII-PRO-KIT are designed for users in the graphic design, digital animation, photography, print production, image analysis and CAD/CAM industries, as well as soft-copy clinical viewing in the medical field. The benefits of using SpectraViewII with an NEC LCD display include:

The MultiSync LCD2690W2-BK-SV and LCD3090W-BK-SV displays are wide-gamut, widescreen LCDs featuring ColorComp™ technology, which reduces LCD uniformity errors by compensating for differences in color/grayscale and luminance across the screen area.

Their advanced backlight technology enables the displays to produce 98 percent coverage and 107 percent the gamut size of the AdobeRGB color space for unsurpassed color reproduction. The 26- and 30-inch displays incorporate in-plane switching (IPS) module technology, which is widely accepted by industry professionals as being the highest-performing LCD technology available on the market, delivering unparalleled color reproduction and brightness uniformity by minimizing off-angle color shift, and clearer black tones in dark-colored images.

The latest version of the SpectraViewII software brings several new features and enhancements, including improved color accuracy and support for the X-Rite ColorMunki spectrophotometer on Mac OS and Windows. Developed for large-volume users, a Linux version of SpectraViewII will also be available in February 2009, providing a truly cross-platform color calibration solution.

The SVII-PRO-KIT is available as an accessory for select NEC LCD displays and includes the new color measurement sensor and SpectraViewII calibration software. Existing customers with a supported color sensor device can purchase the SpectraViewII software separately (SVII-SOFT) at an estimated street price of $104.99.