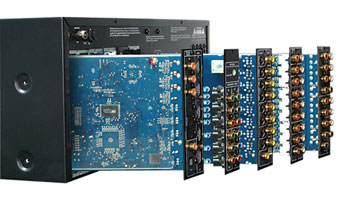 Developed exclusively by NAD, MDC greatly improves products’ performance, functionality and ease of use, while protecting them against premature obsolescence. It also simplifies product servicing, and enables NAD to more quickly bring to market new “advanced technology” features. “MDC’s advantages are clear, for both consumers and our dealers,” said NAD Director of Product Development Greg Stidsen. “Consumers have the comfort of knowing their investments will not become prematurely obsolete, and dealers know they can promote MDC as an important benefit.”

The heart of MDC is four plug-in modules that add valuable features and capabilities while maintaining all input and output connectivity. The modules cover digital audio and HDMI functions, component and analog video functions, and two-channel and multi-channel analog audio functions. They include:

Current owners of NAD’s flagship Theater Series components — the T 175 Preamp-Tuner-Processor and T 785, T 775 and T 765 AV Receivers — can have their units upgraded through their dealers, while upgraded versions of each are also available. Modular Design Construction premieres in NAD’s Masters Series with the introduction of the M15HD Surround Sound Preamplifier.

MDC modules are available from authorized dealers and custom installers at prices ranging from $400 to $950. They can be seen with other outstanding NAD products in Booth 2926 at the Georgia Congress Center during the show.