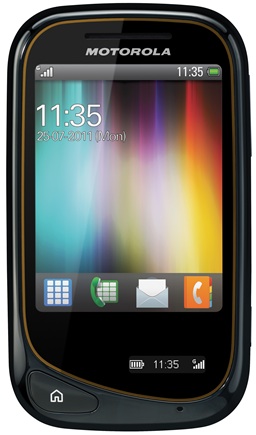 Motorola Mobility announced a splash and dust-resistant touchscreen smartphone called the Motorola Wilder (model EX130). The 2.8-inch touch screen phone lets users access and integrate their social networking accounts, like those from Facebook, Myspace, Twitter and YouTube, so they can connect with friends and stay on top of status updates all day long. Motorola Wilder also features a secondary notification screen, highlighting important information that matters most, like incoming messages from friends and family and information on the music track they're playing.

Motorola Wilder offers an FM radio for streaming the latest hits, exciting games, including Need for Speed, and cool apps, such as Soundhound. The 2-megapixel video camera lets users document their wild adventures, and the Web browser keeps them entertained and informed while on-the-go.

Price and Availability
Motorola Wilder will be available September 2011 in Europe for £75 or 89 (VAT included, suggested price).