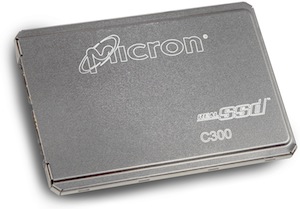 “The C300 SSD not only delivers on all the inherent advantages of SSDs — improved reliability and lower power use — but also leverages a finely tuned architecture and high-speed ONFI 2.1 NAND to provide a whole new level of performance,” said Dean Klein, vice president of memory system development at Micron.

While benchmark tests have shown that the C300 SSD is the fastest PC SSD leveraging the industry standard SATA 3Gb/s interface, the SSD performance is further boosted by natively supporting the next generation high-speed interface — SATA 6Gb/s.

What Does SATA 6Gb/s Mean? It’s All in the Numbers.
Native support of SATA 6Gb/s means that the data path between the host computer and the SSD is twice as fast as the previous SATA 3Gb/s interface. While some drive architectures require a trade-off between throughput-sensitive and IOPS (Input/Output Per Second)-sensitive data streams, Micron’s core design and higher speed interface provides advantages for both. The C300 SSD leverages the SATA 6Gb/s interface to achieve a read throughput speed of up to 355MB/s and a write throughput speed of up to 215MB/s. Using the common PC Mark Vantage scoring system, the C300 SSD turns in a score of 45,000 from the HDD Suite.

“Hard drives gain little performance advantage when using SATA 6Gb/s because of mechanical limitations,” said Klein. “As a developer of leading-edge NAND technology, along with our sophisticated controller and firmware innovations, Micron is well positioned to tune our drives to take full advantage of the faster speeds achieved using the SATA 6Gb/s interface. The combination of these technology advancements has enabled the RealSSD C300 drive to far outshine the competition.”

The drives will be available in 1.8-inch and 2.5-inch form factors, with both drives supporting 128GB and 256GB capacities. Micron is currently sampling the C300 SSD in limited quantities and expects to enter production in the first quarter of calendar 2010.

About Micron
Micron Technology, Inc., is one of the world’s leading providers of advanced semiconductor solutions. Through its worldwide operations, Micron manufactures and markets DRAMs, NAND flash memory, other semiconductor components, and memory modules for use in leading-edge computing, consumer, networking, and mobile products. Micron’s common stock is traded on the New York Stock Exchange (NYSE) under the MU symbol.