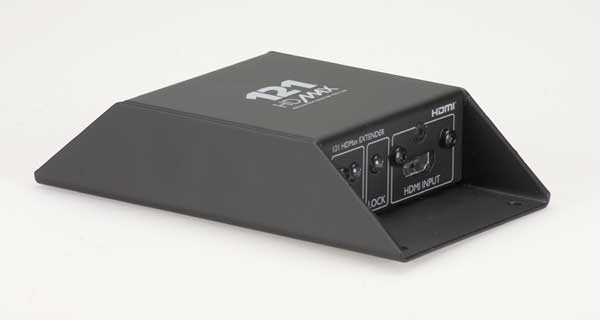 Placed towards the display end of the HDMI path, the HDMAX 121 Extender allows HDMI cable runs of up to about 50 meters (150+ feet), depending on the signal resolution. This is particularly useful when a digital video display device such as a projector is a considerable distance from the video source driving it. The unit is typically placed near the projector or other display device. Proprietary active termination, automatic cable equalization, buffering and de-jittering technology visibly improve image quality, reduce noise and stabilize the video — even on short cable runs. Automatic signal correction allows signals between –20dB and +6dB to be restored to perfect level, edges and eye pattern, making the Extender an ideal HDMI or DVI problem-solver.

The 121 Extender is a small, sturdy metal box, finished in matt black, designed to bolt into position unobtrusively near the display unit; it may also be positioned part-way down the signal path. The unit has one input and one output: the output is typically connected via a short HDMI cable to the display, while the input is connected via a long cable to the video source component. DVI/HDMI conversion cables can be used with DVI sources and destinations. The 121 Extender is powered by an external universal voltage supply or may be operated by any AC/DC supply from 6 to 15V at under 2W consumption, making it suitable for powering from a projector trigger source for example. It can also be powered from the HDMI cable itself in some circumstances. An indicator LED illuminates when lock is established; a power indicator LED is also included.

The HDMAX 421 Switch is a four input, one output HDMI switching unit with extremely wide bandwidth, employing proprietary technology to switch high-resolution digital HDMI video and audio. Each input also includes Meridian’s HDMI Extender technology to improve image quality and stability and reduce noise and jitter on both short and long cable runs. The metal enclosure is finished in matt black with an acrylic front panel matching the appearance of current Meridian components such as the G Series.

The 421 Switch can be controlled in several ways. For direct use, a front-panel button allows the user to step through the inputs. LEDs indicate which input is selected. For serial control, a serial port is provided, allowing interfacing via RS232 command. In addition, sources may be assigned to different inputs, eg DVD = input 1, etc. This allows the unit to be controlled via Meridian Comms (DIN or BNC) so as to select the correct input automatically when a source is selected in a Meridian system. Input assignment can also be carried out in the Meridian Windows-based graphic configuration application.

Input 1 on the 421 Switcher automatically senses the presence of a Meridian DVD-Audio/Video player. When the Meridian player detects the presence of a Switcher, a range of additional options become available in the player’s on-screen display, allowing video sources to be assigned to the other Switcher inputs instead of going via the player’s internal format conversion and scaling (player firmware revision 1.86 or later required). A G12 infrared sensor may be connected via a Comms port for infrared remote control applications.

The 421 Switch includes indicators corresponding to each input to show which is currently selected. The selected input indicator comes on solidly when an HDMI input is valid, and flashes when it is invalid.

The unit is powered by a separate universal voltage supply or may be powered by any AC/DC supply from 6 to 15V, at under 3W. It has rubber feet that may be removed to reveal mounting holes for permanent installation.

Both the 121 Extender and 421 Switch pass both HDMI audio and video and are completely transparent to handshaking, control and data signals, with extremely high bandwidth and virtually zero latency.

Meridian Audio Limited is based in Huntingdon, near Cambridge, UK, and was founded in 1977 by Allen Boothroyd and Robert Stuart. With a 25-year history of innovation and development of the highest quality consumer audio systems, the award-winning company is widely recognized as a world leader in digital and analog audio reproduction. Meridian developed the world’s first audiophile CD player, the world’s first consumer digital surround controller, developed the MLP lossless packing systems mandated for use in DVD-Audio and now in emerging high-definition disk formats, and is the only UK audio hardware manufacturer to be a member of the DVD Forum. The company’s optical disk players, DSP-based loudspeakers and Digital Theater systems are unique in the industry, maintaining a super-quality digital audio signal throughout the path from the source to the amplifier, and using digital signal processing to generate advanced crossover characteristics that would be impossible with conventional passive analogue systems. Meridian has recently become the exclusive manufacturer and distributor of Faroudja High-Definition video processors and projectors.