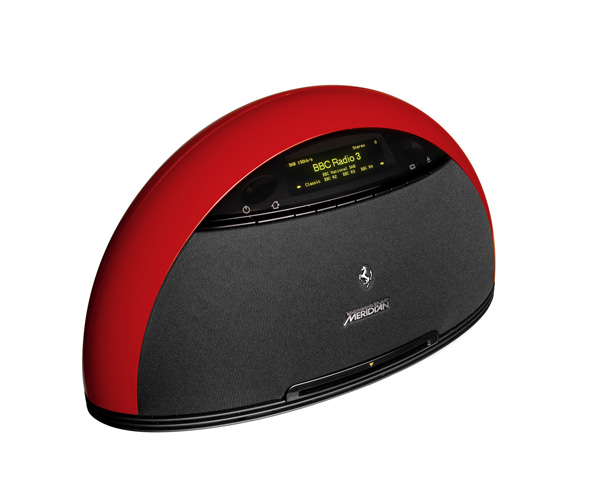 Meridian Audio Ltd., the British company whose uniquely stylish, technologically sophisticated audio and video designs are legendary among knowledgeable AV fans and system-designers, is taking an increasingly active role in courting the design-savvy, upscale consumer. For one example, Meridian will participate in the upcoming Digital Downtown show in New York City, an exclusive free event open to the public from June 12-14 at the World Financial Center in lower Manhattan. At Digital Downtown (Booth #166), Meridian will highlight the stunning new F80 all-in-one entertainment system engineered in cooperation with legendary automaker Ferrari. Meridian will also be informing show visitors about its more “traditional” music and audio-video system solutions.

According to Meridian America president Walter Schofield, outreach of this type is increasingly necessary thanks to his company’s unique status. “Meridian enjoys the enviable position of being perceived as both a “luxury’ brand with exceptional industrial design, and as a serious cutting-edge innovator,” said Schofield. “While in many cases these two appear mutually exclusive, they are inextricably joined at Meridian, and indeed their harmony defines our company’s very beginnings. Over the years we’ve done a great job reaching the ‘technology-first/enthusiast’ consumer; now we’re broadening our efforts to claim mind-share of the high-net worth individual focusing on the design and style side–but with an unvarying commitment to the benchmark performance standards that have been Meridian’s from the very first.”

Another important factor in Meridian’s increasing visibility as a luxury-tech brand is its recent, highly successful association with the Muse Consortium, a group of investors assembled by movie producer Arnon Milchan of Regency Ventures (Pretty Woman, L.A. Confidential and many others) that includes Swiss luxury-goods Richemont Subsidiary Columbus VC (Cartier, Panerai, Montblanc, IWC, Van Cleef & Arpels to name a few) and the principals of the Trian Fund Group and Consolidated Media Holdings. “The Muse Group provides Meridian with unparalleled expertise in establishing luxury brand awareness and building value among the very top tier of consumers, the most quality- and performance-conscious of all,” said Schofield. “Since this is precisely where Meridian thrives, the association is fostering powerful growth through new marketing initiatives, both for our core products and the newer, more broadly appealing creations like the F80.”

From the very beginning, with products like the world’s first high-end CD player, the team instantly established new standards for both visual design and audio excellence, standards that Meridian continues to advance to the present day. The new F80 encompasses 30 years of Meridian innovation representing the past, present and future. Its performance and design are second to none defining a new era for Meridian.

Meridian’s offerings also include digital theatre systems deliver breathtaking high-definition images and stunning surround-sound. The company has become a leader in the reproduction of the auditory and visual ‘clues’ that help create an image of such integrity and purity, as if you hear them through the ears of the record producer or see them through the eyes of the film director.

About Meridian
From a compact stereo system to a bespoke home theatre installation, from a complete system to individual components, award-winning Meridian systems are at home in any environment and are ideal for such varied locations as a luxury apartment, a super-yacht or even a personal jet.

Meridian is a multi-award winning company gaining much critical and industry acclaim as a world-leader in audio reproduction winning over 135 awards for 156 products/innovations to date including the coveted British Design Council Award for Outstanding British Products an unprecedented three times in addition to many other international accolades.

Founded in 1977 by audio engineer Bob Stuart and industrial designer Allen Boothroyd, Meridian Audio Limited design and manufacture from their headquarters in Huntingdon, near Cambridge. The company’s local modern production facilities are purpose-built for the manufacturing of the highest quality consumer audio and video products, distributed in 56 countries including the UK, USA, Russia, China, India, Middle-East and Japan.