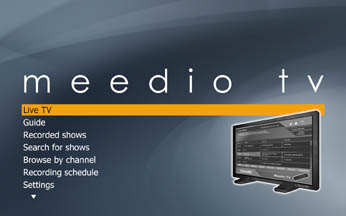 Houston, TX – August 22, 2005 – Meedio LLC, a leading provider of software for digital lifestyles released a free update to the Meedio TV digital video recorder (DVR) software today which adds support for viewing, time-shifting and recording standard and high definition digital TV broadcasts from ATSC and DVB sources. Meedio TV is the first commercial Windows DVR to record digital TV from ATSC Over The Air (OTA), DVB-S, and DVB-T sources. Meedio TV includes a free electronic program guide (EPG) and is available at http://www.meedio.com for only $39.99 with no monthly service fees.

Until now, consumers who wanted to take advantage of their existing Windows PCs to watch and record ATSC and DVB broadcasts were forced to have a commercial system builder replace their entire operating system with Microsoft’s Windows XP Media Center Edition (MCE). With Meedio TV, however, users of Windows XP Home, Pro, or MCE can download and install a standalone application on their existing PC in just a few minutes.

Meedio supports a number of analog TV tuner devices and expects to support additional devices with each new release. Today’s release adds to this growing list with support for the following digital TV tuner devices:

Meedio TV is also available as part of the Meedio Pro bundle for only $79.99. Meedio Pro is a complete digital media center that enables users to enjoy digital photos, music, movies, TV, news, weather, and games through a customizable full-screen interface displayed on a TV and navigated with a remote control. Meedio Pro also includes free access to the Meedio Add-Ins Directory which contains over 200 third-party themes and plugins. 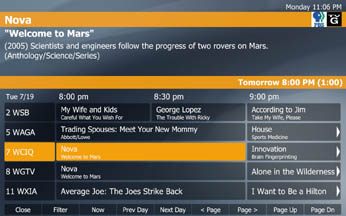 About Meedio
Headquartered in Houston, Texas, Meedio is a leading developer of software for digital home entertainment and automation. Recognized with a 2005 CES Innovations Design and Engineering award, the Meedio platform is used to create a suite of digital lifestyle products for consumers in more than 40 countries and is licensed to resellers, integrators, OEMs, and ISVs worldwide.

Microsoft and Windows are registered trademarks of Microsoft Corporation.