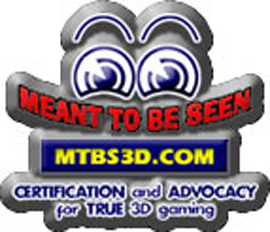 “Meant to be Seen” (MTBS), the World’s First & Only Stereoscopic 3D (S-3D) Certification and Advocacy Group, Has Released Its First Newsletter

‘Meant to be Seen’ (mtbs3D.com) has again added to its membership benefits by releasing its first online newsletter. It can be viewed at www.mtbs3D.com under the news page.

‘We learned from members that they wanted an insider’s look at the S-3D industry, so we gave it to them. Our newsletter is a mix of editorial and journalistic coverage, and as our members give us more and more feedback on what they like, we will expand it accordingly,’said Neil Schneider, President & CEO of Meant to be Seen.

Stereoscopic 3D refers to media that displays images with true volumetric depth through the assistance of special screens, monitors, projectors, and glasses. Best exemplified by screen characters that seem to reach out and touch the player, this technology gives an exciting thrill to video games, and is quickly becoming the equipment of choice for hardcore gamers.

MTBS is the first and only stereoscopic 3D certification and advocacy group. Non-proprietary and independently run, MTBS represents the interests of both stereoscopic 3D technology solutions and consumers with the goal of encouraging programming standards in the game development industry for the best compatibility and ease of use.

“Our site has been up for just over four months, and we are already getting over four thousand unique visitors a month from word of mouth alone. Combined with the coverage we have received from online media like “Digital Spy” and “Custom PC”, we are continually proving ourselves credible in the industry,” said Schneider.

The first newsletter features coverage of Dimension-3 Expo that took place in France, and the Hollywood and Games Summit held in California.

“I was very excited by the Hollywood and Games Summit because it focused on strengthening the inroads between the filmmaking community and the video game industry. There has been a link between movies and video games for some time now where a movie is jointly released with a video game, and the importance of this is even stronger for the stereoscopic 3D industry.” With the movie industry taking on S-3D whole heartedly (e.g. Dreamworks Animation, James Cameron, RealD, Dolby Labs, etc.), the video game industry is starting to feel the pressuring demands to keep up with their sister industry by properly implementing S-3D technology, and selling their customers the products they want. MTBS helps the game developers catch up by sending them S-3D programming standards, and promoting their published success to the industry and our valued members at no cost.

According to Schneider, games are already rendered in 3D, and S-3D does not require special programming. It’s just a matter of following simple programming standards that need very little effort and little to no expense. The MTBS newsletter is looking for stories, and all companies seeking the attention of hardcore gamers and/or stereoscopic 3D enthusiasts are encouraged to email news@mtbs3D.com with their press releases.