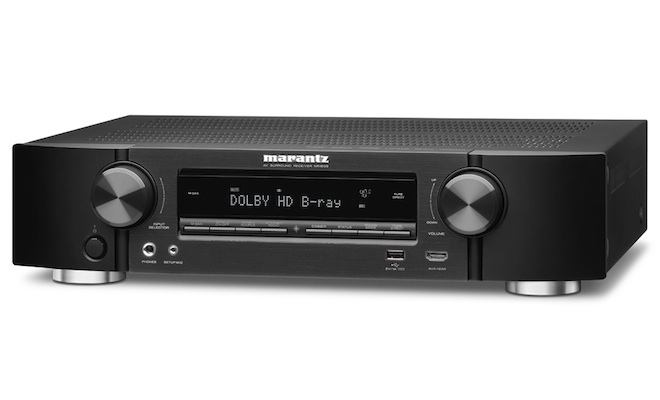 Marantz announced a new $700 super-slim Network 7.1-channel A/V receiver, model NR1605, with built-in Wi-Fi, AirPlay, DLNA, and Bluetooth, which replaces the NR1604. It allows users to stream music from a iPhone, iPad, Android smartphones or tablets, local storage device (NAS), and works with thousands of Internet Radio stations or online music services such as Spotify Connect. Music lovers can even enjoy the latest audio formats such as Apple Lossless and FLAC HD 192/24 or the bitstream DSD format as perfected for SACD players.

Next to the network streaming possibilities, Marantz offers its renowned sound quality made possible through a discrete amplifier section. The NR1605 owns a 7-channel amplifier with 100W equal power per channel. It also has built-in decoders for Dolby True HD and DTS-HD Master Audio. Its total of eight HDMI inputs handle a multitude of digital sources, so there is plenty of ports to easily hook-up a satellite box, BD/DVD player and game console… all at the same time. What’s more, the whole setup is very easy – with the help of the advanced Graphical User Interface (GUI), Setup Assistant, and Audyssey MultEQ room calibration. With this there is no need to study the manual, users just need to follow the on-screen instructions supported by high resolution graphics.

For total convenience, users can also use an Android or iOS device to operate the NR1605 via the available Marantz Remote App, which comes as a dedicated app for either smartphone or tablet. It all adds up to easy-to-use slim-line elegance with a powerful punch. The NR1605 further features support for next-generation TV displays capable of displaying 4k Ultra HD video. Along with 4k and 3D pass-through the NR1605 also features video upscaling technology to 1080p and 4k for ultimate future-readiness. In addition, with the Multi-zone functionality you can output music from the main room to a different room such as a kitchen or bedroom just via an additional pair of speakers.

As with many of this year’s models, the NR1605 includes the latest Marantz smart ECO mode. This reduces power consumption significantly when the receiver is just used for background listening or running on lower levels without any negative impact to the audio quality. If the higher power is required while watching a movie or listening louder to favorite music, the NR1605 automatically switches to “full power output”. The smart ECO mode has three settings: Auto, On and Off leaving it up to the user to decide.

Price and Availability
The Marantz NR1605 Slim Design Network A/V Receiver will be available July 2014 for $699.