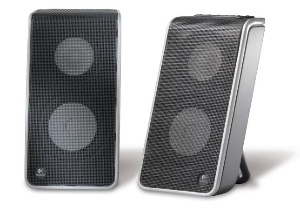 Audio as Portable as a Laptop

With worldwide sales of notebook computers on the rise and the increase of digital music downloads, laptop audio is becoming increasingly important. Logitech, a leading manufacturer of multimedia PC speakers, is addressing the rapidly growing notebook computer market by providing people with high-quality audio when they are on the go.

“Logitech is bringing our expertise in audio to the people who own laptops,” said Ray Weikel, Logitech’s director of product marketing for audio. “We designed the V20 laptop speakers with portability, quality and affordability in mind. We removed the power brick to provide a lightweight solution with less cords and focused on quality sound so listening to music from a laptop computer is a now great experience.”

The Logitech V20 laptop speakers are USB powered and require no additional cables — just plug them in to the USB port to enjoy crisp digital audio quality anywhere. Since the speakers are USB powered, they will work with both PC and Mac laptop computers. The speakers include a collapsible stand on each satellite for maximum portability. The V20 speakers also come with a protective travel case, making it easy to organize cables while shielding the speakers from bumps and scratches.

In spite of their small size, the V20 speakers deliver outstanding bass due to the combination of 2-inch high-excursion drivers and 3-inch pressure drivers. For convenience, Logitech has integrated multimedia controls (play, pause, stop, skip forward and back, volume, and mute) into the top of the speakers so there is no more fumbling with a notebook keyboard to control common multimedia functions. The Logitech V20 laptop speakers will be available in the U.S. beginning in September and Europe in October. The speakers will have a suggested retail price of $79.99 in the U.S.