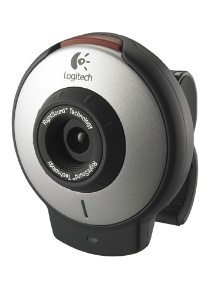 Now in addition to eliminating echo and feedback, Logitech RightSound Technology significantly reduces background noise with included noise suppression. The software identifies the difference between signals from the speaker’s voice and background noise, which allows people to enjoy clearer audio.

High-Performance for the Mobile Professional: Logitech QuickCam Deluxe for Notebooks

The webcam is also extremely easy to use. A snapshot button located on the top of the webcam enables people to quickly take a photo. To accommodate people using larger laptop computers, the adjustable, spring-tension clip works on panels up to 20 mm thick. And because the QuickCam Deluxe for Notebooks is certified for the Windows Vista operating system, people running Windows Vista on their PCs can simply plug in their webcam and start using it.

A Perfect Introduction to Video Communications: Logitech QuickCam for Notebooks

Perfect for first-time webcam users, the QuickCam for Notebooks is Logitech’s most affordable notebook PC webcam. With its built-in microphone and enhanced RightSound Technology, the Logitech QuickCam for Notebooks enables family and friends separated by thousands of miles to talk – without a headset – as if they were in the same room. The new, compact design offers people quick access to common features such as a snapshot button and a focus ring, which helps people obtain better image clarity.

The QuickCam Deluxe for Notebooks and the QuickCam for Notebooks both work with Windows Vista. The new QuickCam software (Version 10.5) includes a number of webcam-specific gadgets, including QuickVideo, QuickPicture and QuickView. Logitech plans to develop additional gadgets for Windows Vista, which are expected to be made available for download at www.logitech.com.

These two notebook webcams will be the first to offer a new Logitech software feature: Fun Filters. Logitech Fun Filters create an outline around any object visible in the image, such as the caller’s face, chair or office furniture. With the simple click of a button, people can change their image to one of twelve fun filters, giving their image a fish eye, neon light or chalkboard-looking effect. Beginning in April, Logitech is expected to offer a growing line of Fun Filters available to download free at www.logitech.com.

Logitech, the Logitech logo, and other Logitech marks are registered in the United States and other countries. All other trademarks are the property of their respective owners. For more information about Logitech and its products, visit the company’s Web site at www.logitech.com.