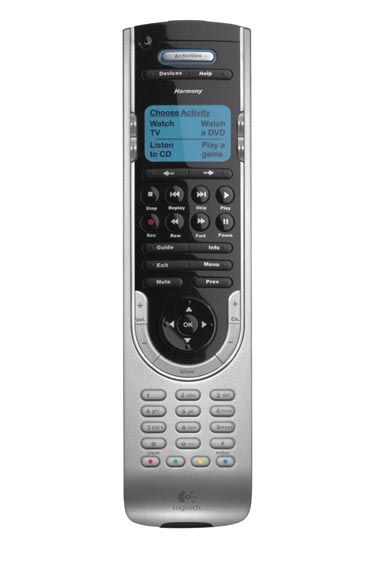 Priced at under $100 in the U.S., Harmony 520 Remote Features Even Easier Setup

FREMONT, Calif. — Sept. 1, 2005 — Logitech (SWX: LOGN) (NASDAQ: LOGI), a leading manufacturer of remote controls, today announced it will soon bring the simplicity and convenience of its Harmony universal remote controls to a significantly broader base of consumers. The company unveiled the Logitech Harmony 520 remote control, the first activity-based remote priced under $100 in the U.S., featuring a simple online setup process for complete customization.

Logitech’s Harmony activity-based remote controls have been widely adopted by home-theater enthusiasts as well as by people upgrading their home-entertainment systems with new high-definition TVs and digital video recorders (DVRs). The popularity of the Harmony remote, which is simple to set up and makes it easy for anyone in the family to control the home-entertainment system, has propelled Logitech into the No. 1 market-share position in North America for advanced remote controls. With one-touch control, the new Harmony 520 remote is designed for mainstream consumers, who previously may have considered a Harmony remote to be out of their price range.

To appeal to a broad base of consumers, Logitech designed the Harmony 520 remote with a very simple and visual setup to speed them through the process. Using a PC, people are likely to spend less than a half hour on the Web-based setup process to fully customize their Harmony remote for their home-entertainment system. Once the setup is complete, any member of the family can watch television, play a DVD, or record a program, by pushing a single activity button.

“As people upgrade their living rooms with HDTVs, DVRs and other new components, they are faced with the complexity of new technology and a different remote for each of the new components,” said Bryan McLeod, vice president of Logitech’s remote control products. “With the Harmony 520 remote, the entire family can enjoy their great new entertainment system by controlling it with one remote that requires pressing one button for a given activity, instead of pressing a long, hard-to-remember, sequence of buttons.”

The Harmony 520 is the first universal remote in its price category that works with all types of components from all manufacturers — including satellite set-top boxes, DVRs and widescreen televisions — without the complex setup process usually associated with a universal remote.

The new remote features a display that serves as the centerpiece for simple activity control, more extensive device control and a valuable Help feature. The four activity-based buttons are designed to launch a series of wireless commands to correctly set up all the components needed for a given activity, such as watching a movie. People can also use the display to access any possible command needed to control each individual component in their system. Meanwhile, the remote’s Help button can aid people if the entertainment system isn’t responding the way they think it should. When the Help button is pressed, the screen displays a short series of simple “Yes” or “No” questions about the components in the entertainment center. Based on people’s responses, the remote sends out the necessary wireless commands to restore the entire system to the proper working state.

The Harmony 520 remote is the first to feature Logitech’s improved visual setup process. The software will soon be included as part of every Harmony remote setup. To set up the Harmony 520 remote, an advanced, intuitive setup wizard walks people step by step through screens that ask simple questions about the entertainment system, the individual components, and how they are connected. This is all done in simple language without the use of technical terms. At the end of the process, all the necessary codes are automatically downloaded from the Harmony database via a USB connection.

Founded in 1981, Logitech designs, manufactures and markets personal peripherals that enable people to effectively work, play, and communicate in the digital world. Logitech International is a Swiss public company traded on the SWX Swiss Exchange (LOGN) and in the U.S. on the Nasdaq National Market System (LOGI). The company has manufacturing facilities in Asia and offices in major cities in North America, Europe and Asia Pacific.