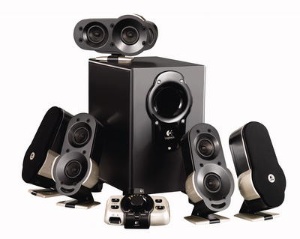 For gamers who want to bring their games to life, the Logitech G51 Surround Sound Speaker System offers all the benefits of 360-degree surround sound — and makes it available with or without a multi-channel audio source. With Logitech’s dual Matrix technology, gamers can create a 5.1 surround-sound experience from any common two-channel stereo source.

“The G51 delivers an immersive surround-sound experience, but it goes far beyond that for gamers,” said Jef Holove, general manager and vice president of Logitech’s audio business. “Surround sound is a competitive advantage in true 5.1 games, plus the system also offers two Matrix surround modes for classic stereo games or music. For online players, the G51 features headphone and microphone jacks with independent mute controls. And, the system was designed to allow modders to easily customize the satellite speakers with their favorite game art or to match their gear. In short, the G51 is authentic gaming equipment.”

Nearly all digital music, and legacy games, are only primed for stereo — or two-channel — sound. Using Logitech’s proprietary Matrix surround sound technology, the G51 speakers split the audio signal into six channels of sound, without degrading the audio quality. That means, even if their game doesn’t provide six-channel audio, people can enjoy it anyway. As a result, gamers can gain the competitive advantages of surround sound — first-person-shooter gamers, for example, can now hear enemies creep up behind them. If they’re being shot at, they’ll know what direction the bullets are coming from.

With 155 watts of total RMS (root mean square) power, the G51 speaker system is optimized to deliver high-performance audio experiences. The G51 speakers feature Frequency Directed Dual Driver (FDD2) technology, which produces a uniform soundfield by housing two drivers in each satellite. FDD2 overcomes high-frequency overlap that leads to uneven sound — a major barrier to dual driver speakers in the past. The result is uniform, intense sound from any place in the room. And with laser-tuned audio drivers, the speakers provide clear audio with less distortion.

Responding to Logitech research, which showed the popularity of headphones and headsets with gamers, Logitech has equipped the G51 speakers with an improved control pod that includes both headphone and microphone jacks. The control pod provides precision dual mute controls, which allows gamers to easily mute the game audio, or mute only the microphone — or both. Independent volume controls and convenient LEDs make controlling the subwoofer, center channel and satellite speakers simple. And with the control pod’s silicone feet, gamers never have to worry about it shifting during intense gameplay.

Because gamers often want to personalize their gaming experience — from computers cases to software profiles — Logitech provides the ability to mod the G51 speakers, allowing gamers to create their own artwork for the four left and right satellite speakers. And gamers can rotate the satellite stands to mount them on the wall, or clip the center channel to the top of their LCD flat-panel monitor.

Pricing and Availability
The Logitech G51 Surround Sound Speaker System is expected to be available in October for a suggested retail price of $199.99 (U.S.).