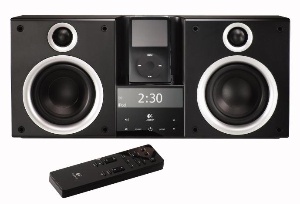 Logitech (SWX:LOGN)(NASDAQ:LOGI), an award-winning manufacturer of premium multimedia speakers, today unveiled its best-sounding, most powerful and most complete speaker system for the iPod: the Logitech AudioStation™ high-performance stereo system for iPod.

This premium stereo system transforms any room in the home into a digital-music concert hall — delivering a full range of incredibly smooth, balanced audio, from floor-thumping bass to the precision high frequencies that bring music to life. Its relatively compact design (16-inches long, 4 1/4-inches deep, 7 1/4-inches tall) allows the AudioStation speaker system to sit elegantly atop an end table, book shelf or even a nightstand. And with the digital AM/FM tuner, the speakers can be a replacement for a traditional living-room stereo system as well as a perfect solution for an office or bedroom.

While its audio performance is impressive, the AudioStation system’s design is equally notable. The elegant one-piece system has a black finish and removable cloth grille covers, accommodating any room’s decor. There are no buttons or knobs on the system — the controls on the front panel are all touch sensitive — giving the speakers a seamless, smooth appearance. When powered on, small LEDs illuminate the touch-sensitive controls with a soft white glow. The buttons are used with the soft touch of a finger to turn the power on and off, adjust the volume up and down, select radio stations, and switch the input from the iPod to other audio sources.

“With the AudioStation, we are redefining the premium iPod speaker category,” said Jef Holove, vice president of product marketing for Logitech’s audio business. “Nothing else delivers this level of full, balanced acoustic performance, the cutting-edge design, and the unanticipated extras — like digital AM/FM radio and touch-sensitive controls. It’s a sophisticated and complete stereo system for any room in the house.”

Above the control panel, the Logitech AudioStation speaker system has a large LCD that can show information such as radio station channels, the time, or an audio spectrum analyzer. The LCD also can display track information using Radio Data System (RDS) for FM stations that support RDS.

For complete control, the AudioStation speakers system comes with an advanced remote that includes the same controls as those on the control panel, as well as a menu button, a sleep timer, and a switch to turn the system’s 3D stereo mode on or off — which widens the stereo sound stage, making the speakers sound farther apart than they actually are. Using the menu button, people can adjust bass and treble levels independently, change the display brightness, and choose whether or not the iPod backlight stays on while plugged into the AudioStation system.

When the iPod is connected using the Universal Dock connector, the AudioStation speaker system can simultaneously play music from the iPod and recharge its batteries. The AudioStation also features a 3.5 mm input that connects to other MP3 players and other audio devices.

Logitech, the Logitech logo, and other Logitech marks are owned by Logitech and may be registered. All other trademarks are the property of their respective owners. For more information about Logitech and its products, visit the Company’s Web site at http://www.logitech.com.