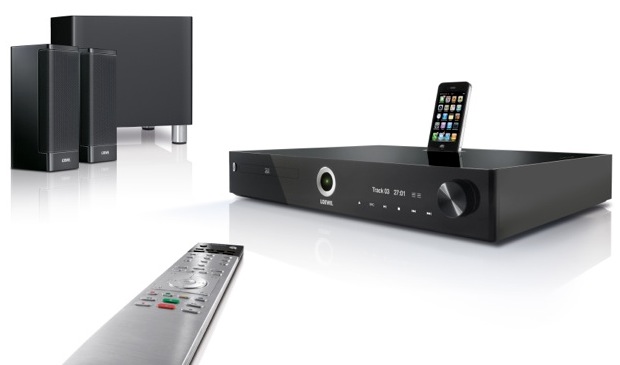 Loewe announced the Home Cinema Set, an integrated speaker system that plays 3D Blu-ray discs, DVDs and CDs, and also docks a iPod or iPhone. Plus it has an integrated music recognition service powered by Gracenote, so you’ll never be left wondering who wrote or performed a soundtrack again.

The Home Cinema Set consists of the Loewe MediaVision 3D one-box system, Loewe Satellite Speakers, the Loewe Subwoofer Compact and the Loewe Assist Multi-Control remote handset. The latter ensures that the Home Cinema Set is exceptionally easy to operate, allowing control of the entire Loewe system and even non-Loewe TV sets. The Home Cinema Set is available in Aluminium Silver and Black and, thanks to interchangeable top-mounted inlays, comes with the option of 250 colour finishes.

The MediaVision 3D one-box system guarantees superior entertainment with vivid visuals and perfect acoustics. Whether it’s to enjoy classic films in 3D or listen to songs from an iPod with top-quality sound, the Loewe set-up makes it possible. Along with the dock, the MediaVision 3D plays back numerous HD audio formats (e.g. Dolby True HD, DTS-HD MA). If an Internet connection is available, the system can even access Gracenote. With this integrated music recognition service, never again will you be left wondering about the title or artist of the music on your soundtrack. While the film is still running, Gracenote makes it possible to search for the musician and song title.

Ripping is also possible with the Loewe MediaVision 3D. This allows much-loved songs to be converted to music files and easily archived via USB. The system is also equipped with state-of-the-art HDMI technology, incorporating two HDMI inputs and one output. 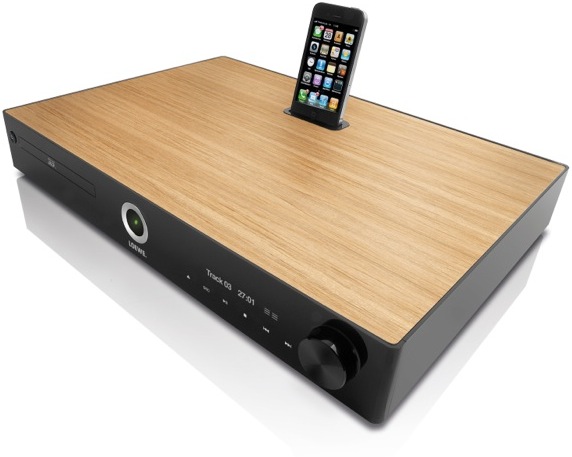 The MediaVision 3D also has a stylishly distinctive design, available with interchangeable top-mounted inlays which allow the system to be tailored to individual tastes, with a choice of 250 different colour options. This allows the MediaVision 3D to integrate perfectly with any living environment and, in combination with the Loewe Satellite Speakers and Loewe Subwoofer Compact.

The design of the Satellite Speakers and Subwoofer Compact also scores with small footprints and clean lines, finished in Aluminium Silver and Black. The speakers are milled from a single aluminium block and both products can be easily integrated into the room, without taking over. Naturally, the insets on the top of both speakers can be made to match those on the MediaVision 3D. Despite its extremely modest dimensions (24cm cubed) a substantial 180-watt amplifier powers the Subwoofer Compact.

Even greater convenience is guaranteed by signal recognition activation. This means that the subwoofer and integrated amplifier automatically switch on as soon as an audio signal is recognised at the ports. The audio link interface further facilitates the installation of the Loewe Home Cinema Set: just a single cable links the subwoofer to the MediaVision 3D.

Price and Availability
The Loewe Home Cinema Set is available from late October 2011 for £1,600. The MediaVision 3D can be purchased on its own, without the Satellite Speakers and Subwoofer compact, at £850.