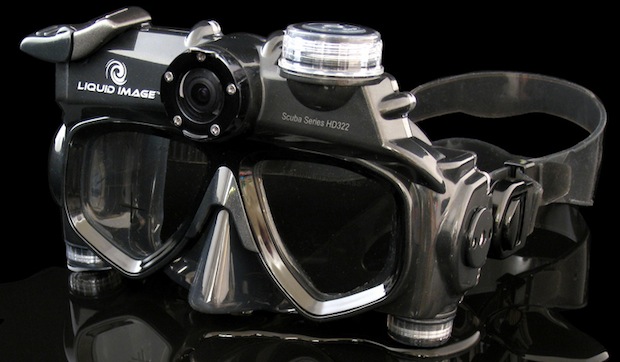 The new Liquid Image Wide Angle Scuba Series HD322 Camera Mask will feature a 135 degree wide angle lens and HD 720P video. The lens modification more than doubles the current Scuba Series HD320’s field of view to capture all the action underwater in High Definition while snorkeling or scuba diving. The model will be on display at the CES Unveiled Event January 5th and at CES in Las Vegas January 7th-10th.

The Wide Angle Scuba Series HD322 is a mid size dive mask that records HD 720P video (1280×720) at 30fps along with 5.0MP still images. The depth rating on this new model is 40m/130ft, which covers depths reached by certified recreational divers. The mask has a micro SD/SDHC card slot and comes with a 2GB micro SD card. The memory can expand up to 32GB, to record thousands of still images or approximately 16 hrs of video. The camera operates on 4 x AAA Batteries. Estimated Lithium battery performance is 2000 still images or 2hrs of video.

The mask features lever style buttons which are easy to press while wearing diving gloves. To record a photo or a video, simply turn on the camera, choose the mode, then press the shutter button. LED lights inside the mask indicate the mode to the user. The buttons are positioned along the upper right corner of the frame and area easy to access.

The new wide angle will solve the issue of not completely framing the subject which some first time Camera Mask users have experienced with the original 54 degree lens. The wider angle POV camera will capture a larger field of view and therefore allow the user to think even less about operating the camera while snorkeling or scuba diving.

The Wide Angle Scuba Series HD322 has an estimated US price of $350. The mask will also be available with a large silicon skirt, Item #323.

The Wide Angle Scuba Series HD models 322 and 323 are estimated to ship in May 2010, in time for summer. These new models follow the concept of the original Liquid Image Underwater Digital Camera Mask by creating an easier way to record photos and videos. The concept of integrating the camera into the sports equipment allows the user to travel with fewer items and to keep their hands free while performing sports activities. The integrated camera records a view similar to what is seen, allowing the user to share their experience with other people, and to enjoy their activities to a greater extent because they concentrate less on holding and operating the camera.

Accessories include 4.7 Watt LED Torch (side lights) and the Blue Water Filter that began shipping at the end of 2009, plus the Green Water filters that will begin shipping in January 2010.

Liquid Image Co, LLC, is a manufacturer of cameras, electronics, toys and games that target sports and outdoor activities with an emphasis on Sports Technology and POV cameras. The corporate office is located in Sacramento, CA, with an international office located in Hong Kong.