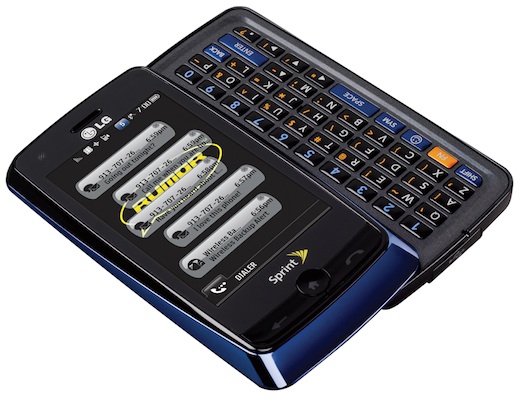 Sprint and LG announced the upcoming availability of the LG Rumor Touch™ (model LN510), successor to the LG Rumor™. The LG Rumor series first launched in 2007 with the release of LG Rumor, a full QWERTY keyboard device that soon became one of Sprint’s most popular messaging devices. LG Rumor Touch will give consumers the latest in touch screen technology to keep them in touch while on-the-go.

The feature-rich LG Rumor Touch boasts a large 3-inch WQVGA touch screen, 2 megapixel camera and camcorder, MicroSD card slot supporting up to 32GB, Google Search and 3G data capabilities operating on Sprint’s EVDO Rev. 0 network — keeping customers in the middle of the action with instant access to update their Facebook status, upload a picture to Photobucket or find the coolest hangout with its built-in GPS.

LG Rumor Touch also offers access to Sprint Navigation, Sprint TV, Sprint Music and Sprint Mobile Email with personal and corporate calendar features. LG Rumor Touch will be available in blue in the first quarter, with more color options coming later in the year. Pricing and availability will be announced at a later date.