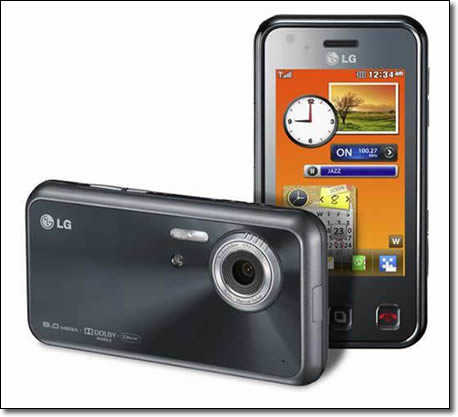 LG Electronics have now launched an upgraded version of their groundbraking touchscreen series, the new LG KC910 Renoir is the first mobile phone from the manufacturer to feature an 8 megapixel camera lens and looks set to be a real prospect as an upgrade to the Viewty phone.

The LG Renoir is not the only mobile phone to be released of late with an 8 megapixel camera, there is strong competition from both Sony Ericsson and Samsung with their latest models also featuring this technology, however the LG Viewty gained a huge customer base and when these users start to look to upgrade their phone packages then this new offering will be an obvious choice.

The LG KC910 Renoir takes everything that was good about the KU990 Viewty and makes it even better, the overall look of the handset has not changed drastically still retaining the slim dimensions, large touchscreen display and squared edges but the technology and features within the phone have been upgraded and extras added in for good measure.

The LG KC910 is the successor to the popular LG Viewty. Again a touchscreen phone, the KC910 sports an impressive 8.0 Megapixel camera with a Schneider Kreuznach lens, autofocus, manual focus, Face Tracking, Smile Shot and blink detection and a xenon flash plus an in-built GPS receiver enabling Geotagging of your photos as well as use as a navigation tool.

The LG Renoir, or KC910 by code, will be LG’s first plunge into the almighty realms of the 8-mega-pixel mobile phone camera market. The handset is slimmer than most of its high quality camera competitors, measuring only 14mm thick. Technically, the LG Renoir is probably just as much a camera as it is a mobile phone.

The photographic qualities include smile detection; blink detection, flash, and geo-tagging through the GPS feature. Not to forget the most important selling factor of this mobile phone, the camera is 8 mega-pixels, fully displayed in all its colourful glory on a 3-inch touch screen display.

The LG Renoir comes with MP3, wi-fi, video calling, and document viewer technology. The GPS is precise & clear, whilst the accelerator touch screen navigation is easy & simple. The design is sleeker than most, supporting smooth corners & simplistic interfaces.

The LG Renoir has been initially released on Orange pay monthly contract tariffs in the UK, however this new handset is expected to be launched on further networks aswell as a SIM Free and Pay As You Go release over the coming weeks.

Although not as yet confirmed we are presuming that as with the previous Viewty model there will be colour variants released of the LG Renoir, the Viewty was eventually released in Red, Purple and Silver colour schemes and so the new Renoir will probably be given the same treatment.