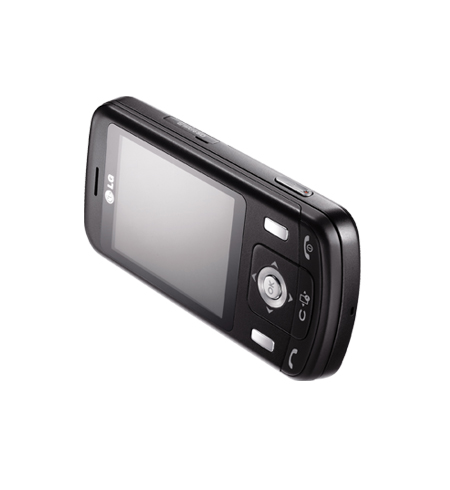 The new 8 megapixel camera phones market is starting to expand, the latest addition to this high specification category is the LG KC780 which is the manufacturers second camera focussed mobile phone release.

Joining the LG Renoir also known as the KC910 the new KC780 offers the same camera technology with a new widescreen display which is perfect for taking portrait pictures. The LG KC780 is is less expensive alternative to the Renoir but still packs a punch when it comes to camera features.

The 8.0 megapixel camera offers Face and Smile recognition, the KC780 makes it easy to shoot good pictures of people, after setting the menu to ‘face tracking’ the user can then half press the camera button to automatically focus on the face in front of it and then press again for the in-shot face focus. Then ‘Smile Detection’ kicks in and recognises the smile of the subject when the sides of their mouth go up at a certain angle!

The LG KC780 also features a smile shot and beauty mode, making every smile one to remember ‘Smile Shot’ takes it a step further by automatically taking the picture when the subject smiles without the user actually pressing the capture button! ‘Beauty Mode’ cleans up a picture by automatically removing blemishes and imperfections from the subjects face almost professionally editing the photos before they are even exposed!

Another new feature that was first seen in the LG Cookie phone which is also known as the KP500 is M-Toy, a new way of gaming that is similar to using a Nintendo Wii, users can simply move and tilt the LG KC780 to control game play on preloaded games such as Darts, Mazes and Fishing.

The KC780 is slightly slimmer than the LG Renoir aswell as being smaller overall in dimensions, the Renoir measures 14.5mm in depth and 107.8mm in overall height where as the KC780 is just 13.7mm by 105mm, the KC780 does not offer the touchscreen technology of ther Renoir however this is reflected in the overall price of the handset.

Despite the cheaper price tag LG have not held back offering the 8.0-megapixel camera with autofocus flash digital zoom and an image stabiliser. As if that was not enough the LG KC780 features a Schneider Kreuznach lens proving only the best will do! Photography enthusiasts will be impressed by the face recognition tracking which produces high quality photos that are sharp and clear, with the added bonus of recognizing the angle of people’s mouths and adjust focus for faces.

For times when a picture is not enough the LG KC780 has video recording capabilities for capturing DVD-resolution videos of every exciting moment. This means that movies captured will still look great when played back on the captivating 2.4-inch widescreen. Or when played back via the phone to a TV screen.

The KC780 is packed with the latest mobile phone technologies including; Smart Bluetooth Motion, Sensor Games and WAP 2.0 which allows access to emails and a range of information from the internet.

The LG KC780 also features 140 MB internal memory a built in MP3 player and FM radio for music on the go and is a quad band phone for use in over 120 different countries.

Initially released on Orange in the UK it is expected that the new LG KC780 is to be launched on T-Mobile, O2 contract tariffs aswell as a Pay As You Go mobile phone and as a SIM Free device with no network or contract ties.