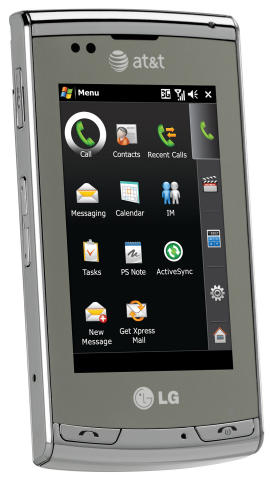 The LG Incite boasts the latest in wireless communications technology, with domestic and international 3G capabilities, built-in aGPS and Wi-Fi (802.11 b/g) and Bluetooth 2.0. The LG Incite is equipped with Windows Mobile 6.1 Professional, Microsoft Office Mobile and Microsoft ActiveSync 4.5. The Incite, the first of its kind for LG Mobile, offers Windows Media Player 10.

LG Incite looks as good as it sounds: a sophisticated, sleek design, a crystal-clear 3-inch touch screen and a 3.0 megapixel camera and camcorder that enables consumers to send and enjoy memories at the touch of a button. Users have a choice of on-screen virtual keyboards — a full, QWERTY keyboard in landscape mode and a 20-key keyboard in portrait view — with haptic keys that provide vibration feedback. The Incite also offers users choice in terms of screen navigation by simply using their fingers to move through the Incite’s friendly user interface, the scroll button to the upper right of the screen or the included stylus. A configurable, drag-and-drop favorites menu provides quick access to the applications that matter most to the user.

The Incite is pre-loaded with everything you’d expect, including AT&T Navigator, powered by TeleNav, featuring turn-by-turn voice and on-screen directions with colorful 3-D moving maps that can be used in vehicles or while walking. AT&T Navigator also features traffic alerts, re-routing and other location-based services. There also is business and personal e-mail access through Microsoft Direct Push and AT&T’s Xpress Mail service, instant messaging and AT&T Mobile Music service, which provides fast access to downloadable music from eMusic.

Store all your favorite songs with the microSD Memory Port with up to 16GB of support. Bluetooth 2.0 capabilities allow consumers to wirelessly access music through stereo headsets, transmit data to other Bluetooth-enabled devices and make calls hands-free anytime. The Incite also features AT&T Video Share(SM), the first-ever service in the U.S. that allows users to share live video over wireless devices while participating in a voice call.

“LG Mobile Phones has done an outstanding job in its first offering in the U.S. smartphone arena with the LG Incite, and AT&T is pleased to the be first U.S. carrier to offer an LG smartphone,” said Michael Woodward, vice president, Smart Devices for AT&T’s wireless operations. “It is a great looking smartphone with powerful capabilities that will provide our customers with a new and outstanding choice in our Windows Mobile smartphone portfolio, which is the broadest in the industry.”

Ehtisham Rabbani, vice president of Marketing and Product Strategy for LG Mobile Phones, said: “LG is excited to offer a phone with a different capability than anything we’ve offered in the U.S. thus far. As a leading provider of handsets, LG constantly looks toward the future and strives to incorporate the newest technologies as they become available to our consumers.”

The Incite operates on AT&T’s 3G BroadbandConnect network, which currently is available in more than 320 major metropolitan areas in the U.S. and, by year-end, AT&T expects to offer the service in nearly 350 leading U.S. markets. In addition to 3G connectivity, the Incite is also designed to connect seamlessly with AT&T’s nationwide1 EDGE network, which is available in more than 13,000 cities and towns and along some 40,000 miles of major highways. When abroad, customers can use the Incite to make a phone call in more than 200 countries and access data in more than 150, including more than 60 with 3G networks. AT&T has the broadest international wireless coverage of any U.S. carrier.

The Incite is available now in AT&T retail stores nationwide and online at http://www.wireless.att.com for $199.99 with a new two-year agreement and mail-in rebate. AT&T voice plans begin at $39.99 with monthly enterprise data plans priced at $45 and personal data plans at $30 per month. Small business customers also can subscribe to AT&T’s new, industry-first BusinessTalk voice plans, which start at $60 a month for five users and 700 Anytime Minutes and can be expanded for $9.99 a line to accommodate up to 40 users and 20,000 Anytime Minutes.

1 Not available in all areas.