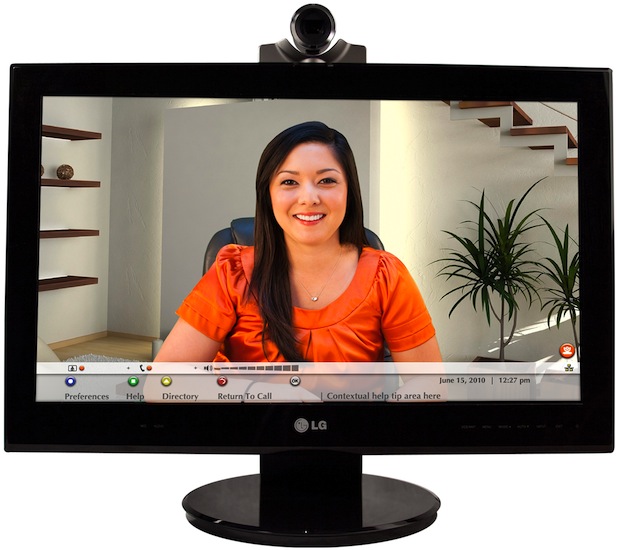 LifeSize Communications has collaborated with LG Electronics to introduce an integrated communications solution to combine HD video and voice communications, housed within a 24-inch HD display. LG’s Executive Video Conferencing System, powered by LifeSize, is easy to deploy and fully interoperable with industry standards, enabling executives, remote office employees and teleworkers to connect face to face with anyone, anywhere.

“Our guiding principle with LG Executive, powered by LifeSize, was to develop an attractive solution that makes communicating with other video users simple,” said Jeff Dowell, VP of Digital Signage, LG Electronics. “The integration of LG HD display technology with LifeSize’s innovative HD video communications technology results in a natural extension of the high-quality, immersive experience of LifeSize room-based and telepresence systems.”

LG’s Executive Video Conferencing system boasts a sleek form factor that is powered by LifeSize HD video communications technology, which has been seamlessly integrated into the 24-inch HD display to deliver:

Not only does LG’s Executive Video Conferencing System, powered by LifeSize, deliver unrivaled HD video communications functionality and performance, but the system is amazingly easy to use. Setting up the system takes minutes and only requires the connection of two cables. Designed to fit into the natural desktop-based workflow, the intuitive LifeSize graphical interface allows users to easily switch the system between HD video conferencing and PC monitor functionality.

Pricing and Availability
LG’s Executive Video Conferencing System, powered by LifeSize, is priced at USD $2,999 with global availability expected in the third quarter of 2010.

The Best Wireless Headphones? The HiFiMan Deva and the Dali IO-6

If you’re willing to spend $500 for a pair of wireless headphones, what are some of the best options? The HiFiMan Deva and Dali...

While not inexpensive, the PMC Twenty5.22i stand-mounted loudspeakers are one of the best below $4,500 and a gorgeous piece of industrial design.