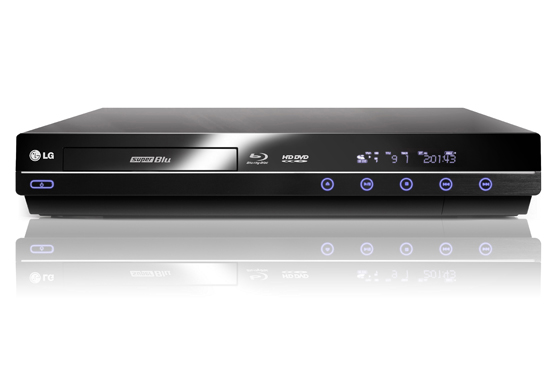 LG’s Super Blu Player will be available to U.S. consumers and custom installers in mid-October at a suggested retail price of $999.

The BH200 further strengthens LG’s position as an innovator. Seven months ago, LG was the first to launch a dual-format high-def disc player, the award-winning BH100. That technological breakthrough has been widely recognized as a groundbreaking product with industry accolades including CNN’s Best of CES, CNET’s CES 2007 Best in Show and Home Video categories and Popular Mechanics’ CES Editor’s Choice Award.

Mark Horak, executive vice president for Warner Home Video, the only major studio supporting both the HD DVD and Blu-ray disc formats, said, “The availability of movie titles on competing high-def disc formats is a challenge for both retailers and consumers. The introduction of the second-generation LG Super Blu Player addresses this challenge by fully enabling both high-def formats on one convenient player, encouraging the adoption of next-generation disc technology and growing the market.”

One Player, Latest Technology
The Super Blu Player offers increased HDTV entertainment choices, because it can play 50 to 60 percent more high-def movie titles than either single-format player. With full networked interactivity available from selected HD DVDs, and the capability to handle networked “BD-Live” interactivity in forthcoming Blu-ray discs, it is the latest available technology that plays both disc formats.

Viewers can enjoy advanced options such as “Picture-in-Picture” available from many Blu-ray discs as well as HDi web-connected interactivity available from many HD DVDs. Access to these features enables viewing of storyboards, production videos and director’s commentary as the movie is playing, as well as accessing up-to-date information. The Super Blu Player also accepts additional entertainment content via a network connection, making for an unmatched entertainment experience.

In addition to supporting the latest high-def disc technologies, the Super Blu Player is the ideal match for movie enthusiasts and even music enthusiasts as it supports audio CDs and the ability to up-scale standard DVDs to 1080p resolution.

“With its improved features and functionality, the BH200 is perfect for the custom installer in search of the next-generation player as it eliminates the need for a second player and the additional cables it requires,” said Tim Alessi, director of consumer electronics marketing at LG Electronics USA, Inc. “With full support for features available on both Blu-ray discs and HD DVDs, it serves as the flagship of the LG home video product line and complements the company’s expanded line-up of ‘Full HD’ 1080p flat-panel HDTVs.”

The new Super Blu Player incorporates LG’s SimpLink™ connectivity solution, enabling easier control of other LG SimpLink compatible equipment. The units are connected with an HDMI cable and use the HDMI-CEC communication standard. This allows the user to control other components on-screen or directly from each component. The BH200 also is equipped with a USB Media Host for easy access to digital music and photo libraries.