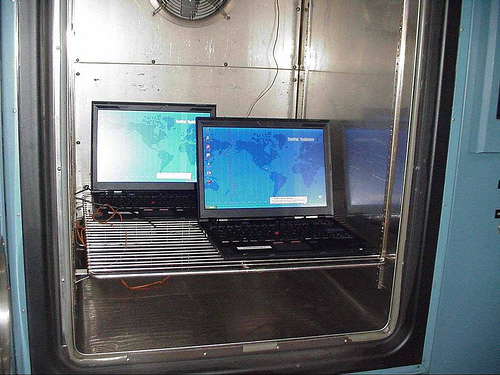 Lenovo announced that it is designating eight ThinkPad laptops for use in field and vehicle semi-ruggedized computing environments such as in public safety, utilities, construction and the military. The ThinkPad X200, X301, X200s, X200 Tablet, T400, T500, R400 and SL300 laptops meet a barrage of military specifications tests and are enhanced with uniquely-designed durability features such as an airbag-like protection system and a roll cage in select models. Because field computing requires excellent screen viewability, Lenovo is also adding a new optional 680-nit high brightness panel to its most popular laptop, the ThinkPad T400 laptop.

Military Spec Tested Against the Elements
Baked, battered, blistered and blown with sand, Lenovo put the lineup of eight ThinkPad laptops through the gauntlet to pass a significant number of specifications for military-grade computing.

The ThinkPad laptops met tests for:

The tests confirm the durability and reliability that many customers already rely on to battle the elements. Geophysicist, explorer and expedition leader Pasquale Scaturro travels to the far reaches of the planet with his ThinkPad laptop.

“For over 180 days a year I can be found on the road traveling with my ThinkPad laptop -sweltering in the hot jungle terrain and surviving frigid arctic and mountain blasts,” said Pasquale Scaturro, Exploration Specialists, Inc. “From bugs and humidity, to sand and dust, heat and cold, my ThinkPad laptop has been exposed to them all. I’ve logged more miles on my ThinkPad in the roughest and most extreme environments in the world than perhaps any person alive. From the heights of Mount Everest to the full length of the Nile, the world’s longest river, it’s been with me. The Active Protection System is a must in the rough environments I’ve taken this laptop into. Besides using my ThinkPad to help me navigate in my airplane when I’m flying in the African bush (it’s my real co-pilot) and send Internet dispatches to my website from Mt Everest, I depend on it to keep my geophysical business and my personal connections going. It has withstood every imaginable environment on Earth and is still performing without missing a beat.”

“Although not billed as a ‘ruggedized’ laptop at the time, the features offered far surpassed the other manufacturers. The fact that the ThinkPads came with a roll-cage design, shock resistant hard drive, built in security chip and the familiar red button as well as touchpad all as standard features really made my choice clear.”

Built Upon a Strong Foundation for Low Total Cost of Ownership
Lenovo engineers extra durability and reliability features into its ThinkPad laptops to help them survive all-weather conditions, lasting longer and outperforming competitors and leading to a low total cost of PC ownership.

Lenovo durability features include the:

“ThinkPad is well known for quality, reliability and innovative security technologies for business computing,” said Tom Ribble, director, Worldwide ThinkPad Product Marketing, Lenovo. “We’ve always built tough laptops that can weather extreme conditions from hiking the rainforests of the Amazon to flying in space. You don’t need a PC that looks like a tank to excel in harsh environments, and unlike many of our competitors, we don’t put an extra charge on toughness.”

1 As stated publicly on 2/24/09 on www.dell.com and www.panasonic.com.
2 Prices do not include tax or shipping and are subject to change without notice and is tied to specific terms and conditions. Reseller prices may vary. Price does not include all advertised features. All offers subject to availability. Lenovo reserves the right to alter product offerings and specifications at any time without notice.