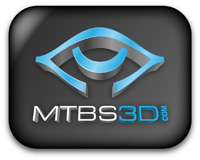 MTBS Toronto, Ontario, –May 1, 2008 — “Meant to be Seen’ (MTBS) is the foremost authority and advocacy group for consumer stereoscopic 3D (S-3D) technology, and is the number one website and resource for both industry and end-users in this field.

“MTBS is just over a year old now, and with the responsibility of representing the stereoscopic 3D consumer industry, it’s time we looked the part. Based on member and partner feedback, the whole website has been given a sharper look, a new logo, and a lot more content for both customers and industry alike. So far, the response has been tremendous, and numerous leading game developers and industry players have stepped forward to get more involved,’ said Neil Schneider, President & CEO of Meant to be Seen.

Similar to the experience movie goers get in 3D movie theaters, consumer gamers use S-3D technology at home for superior game immersion, visual beauty and game enjoyment. In video games, stereoscopic 3D hardware makes explosions fly out of the screen and adds a depth that makes the screen look like a window rather than a flat projection. Sample hardware includes stereoscopic 3D monitors, head mounted displays, 3D HDTVs and more.

“Our members have recently enjoyed interviews with Electronic Arts Korea, Samsung, Mitsubishi and more. In all cases, MTBS subscribers have the opportunity to ask the leading industry players questions because consumer 3D’s growing success is dependent on giving customers the opportunity to express their views and shape the industry. Who better to demonstrate demand for this technology than customers?’ said Neil Schneider, President & CEO of Meant to be Seen.

Certification
“When game developers earn complimentary MTBS certification, our members are made aware of which games are compatible with their at-home stereoscopic 3D hardware solution. If there are challenges, we get the developers hooked up with the different stereoscopic software developers to get the best results,’ Schneider explained.

Outside of certification, MTBS and its members have done specialized stereoscopic 3D game reviews for titles by Ubisoft, Epic Games, Bethesda Softworks, and more.

“We want games to be successful so customers get the best visual experience possible. When we find problems, we work with the game developers and the S-3D driver developers to make things look their best. Most recently, our team was able to improve Unreal Tournament 3 to look fantastic in stereoscopic 3D using the iZ3D LLC software solution,’ Schneider explained.

About Meant to Be Seen
Non-proprietary in nature, MTBS is independently owned and operated. It is funded by an unrestricted education grant from iZ3D LLC and TDVision Corp.

iZ3D LLC are the makers of the leading stereoscopic 3D monitor and S-3D gaming software solution. TDVision Corp are developing the first high resolution head mounted display for consumers, and are the inventors of the innovative TDVCodec used in stereoscopic 3D movies. Additional industry participants are welcome.

All interested gamers, game developers, and gaming media are encouraged to learn more about MTBS and what stereoscopic 3D has to offer by visiting http://www.mtbs3d.com.